Did you know that the Indian national flag is only ever made of khadi? On its 68th birthday, we learn about the history and origins of the Tricolor. 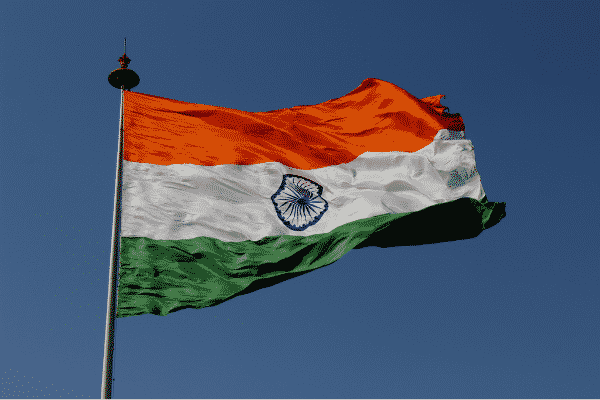 The Indian flag has been in its present form since 1947. It served as the national flag of the Dominion of India from 15 August 1947 to 26 January 1950, and of the Republic of India since. But its history and evolution dates back to 1904 when Sister Nivedita, an Irish disciple of Swami Vivekananda, designed the first flag for India. This flag, containing red and yellow colour stripes and Bonde Mataram written on it, was known as Sister Nivedita’s flag. It evolved in 1907 when it was designed by Madam Bhikaji Cama, Veer Savarkar and Shyamji Krishna Varma and had green, saffron and red stripes.

Later in 1916, Pingali Venkayya produced a flag with two colours and a ‘charkha‘. This design was not favoured because of the religious interpretation of its colours which represented only the Hindu and Muslim communities. In 1917 and 1921 two other modifications of the national flag came about, and the former was adopted by the Home Rule League as their official flag.

Finally, Pingali Venkayya modified the Indian flag in 1931 to include three stripes each of saffron, white and green. The white in the middle had the symbol of a charkha. This flag, representing all communities of India became the official flag of the Indian National Congress and was adopted as the National Flag of India with some modifications – the charkha was replaced by the ‘chakra‘ in the middle of the white stripe.

On July 22, 1947 the flag was deemed the national flag of India. It now acquired a new meaning; from being the representative of different communities of India, it now represented a nation.

Symbolism of the flag

The Indian flag constitutes three horizontal stripes and the symbol of a wheel. The top strip is deep saffron, followed by a white band with a navy blue wheel in the centre and a green strip at the bottom. The symbolism was explained by India’s first Vice-President Sarvepalli Radhakrishnan.

The saffron colour signifies denouncement and disinterest in material things. It also stands for valour, sacrifice and unity. The white signifies the path of truth, purity and light to guide the nation. Green stands for fertility, prosperity and a strong relation to the soil. The wheel is called the “Ashoka chakra” and is adapted from the Ashoka pillar in Sarnath. The diameter of this chakra is three-fourths of the width of the white stripe. On the flag, the wheel has 24 spokes symbolising 24 hours in a day.

The tiranga is only ever made of khadi, with ratio of the width to length always 2:3

Certain rules govern the use of the Indian flag, as contained in the Flag Code of India

READ ALSO: Where to buy Indian flags in Australia