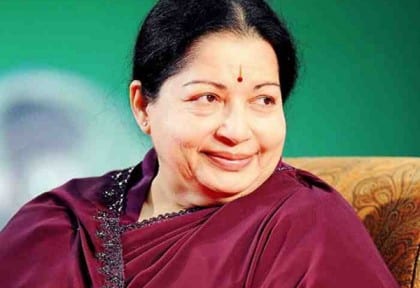 Tamil Nadu Chief Minister J. Jayalalithaa laid to rest at Marina Beach amid honours and last respects from across the political divide

Tamil Nadu Chief Minister J. Jayalalithaa was laid to rest at the Marina Beach on Tuesday evening as President Pranab Mukherjee and Prime Minister Narendra Modi joined the nation to pay their last respects to the iconic actor-turned-politician.
As the sun began to set, Jayalalithaa’s confidante Sasikala performed the final rituals overseen by a Brahmin priest before her tricolour-draped body in a sandalwood casket was lowered into a grave near the MGR memorial.

As an era ended in Tamil Nadu, Jayalalithaa’s last journey started from Rajaji Hall, where lakhs thronged for a final look at their iconic leader, and slowly moved towards the Marina Beach flooded with mourners.
The three-kilometre procession through Chennai streets, packed on both sides by men and women, many weeping, consumed more than an hour.
The AIADMK chief was laid to rest with full state honours next to her mentor and party founder M.G. Ramachandran or MGR, who brought the young Jayalalithaa from filmdom into the male-dominated Dravidian politics.
Her successor Chief Minister O. Panneerselvam and Sasikala, dressed in black, were seated on the military truck that towed the glass casket-laden carriage with Jayalalithaa’s body.
Her admirers and fans, young and old, showered petals at the hearse. Many refused to accept that Jayalalithaa had passed away, leaving the AIADMK orphaned.

“It is difficult to accept that Amma is no more,” K. Nagalakshmi, who delivers milk to homes, told IANS. “This was not the age for her to die. She could have lived for some more years.”
As the funeral procession reached its destination, sobs filled the air. Many were in tears.
There were dramatic displays of emotion, with people wailing inconsolably and beating their chests and heads. There were loud cries of “Amma, Amma”.
Thousands of security personnel were deployed as top politicians from across the country attended the last rites of Jayalalithaa, 68, who died shortly after midnight on Monday following a 74-day battle with illness.
Mukherjee and Modi led the nation in paying respects to Jayalalithaa. Both walked separately towards the casket with folded hands, bowed and laid a floral wreath.
The otherwise throbbing Chennai shut down on Tuesday. So did much of Tamil Nadu, a state where Jayalalithaa — Amma to her followers — was revered by millions.
Chief Ministers from Delhi, Andhra Pradesh, Odisha, Uttar Pradesh, Karnataka and Puducherry, Congress Vice President Rahul Gandhi and others too paid their last respects.
Across the country, political stalwarts noted how the AIADMK chief had unleashed numerous pro-poor schemes as Chief Minister that earned her fame not only in the state but across the country.

Security forces kept a close vigil across Tamil Nadu amid fears of self-harming protests by her fans.
Tamil Nadu has declared a week-long mourning, during which schools and colleges will be shut for three days. No state transport corporation buses plied on Tuesday and millions stayed indoors.
The central government too announced a day of mourning.
US Ambassador Richard Verma mourned her death. “On behalf of the US, I extend my deepest condolences to the family of Jayalalithaa and the people of Tamil Nadu.”
Sri Lankan President Maithripala Sirisena said he was saddened by her death and noted that she had a “towering presence in Indian politics”. Sri Lanka and Tamil Nadu are separated by a strip of sea.
Union Minister for Civil Aviation P. Ashok Gajapathi Raju said India had lost a visionary and exemplary leader, a multitalented personality and a person of ever-helping nature.
“Combining the qualities of the head and the heart, she won the admiration of all her colleagues and love of all fellow citizens. Her sudden demise has left a void which would be impossible to fill,” he said in a statement here.
Leader of the Congress in the Lok Sabha Mallikarjun Kharge said he was deeply saddened to learn of the passing away of Jayalalithaa.

“The untimely demise of Jayalalithaa is a loss not only to the state and people of Tamil Nadu but also to the entire nation. Her loss will be deeply mourned by all those who knew her and all those whose lives were touched by her,” Kharge said.
Canada’s High Commissioner to India Nadir Patel said: “On behalf of the High Commission of Canada, I am deeply saddened by Chief Minister Jayalalithaa’s passing. I extend my sincere condolences to her family, and to the people of Tamil Nadu. Chief Minister Jayalalithaa and her valuable contributions to the people, development and progress of Tamil Nadu will not be forgotten.”
Naushad Forbes, President of the Confederation of Indian Industry, said the country had lost a visionary, dynamic and inspiring leader.
“During her tenure as Chief Minister of Tamil Nadu, the state has transformed and retained its leadership position as the most favoured investment destination in India with the presence of diverse industries,” said Ramesh Kymal, Chairman of CII Tamil Nadu State Council.