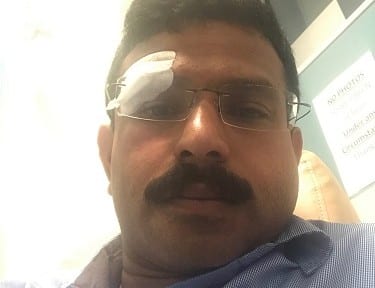 Part-time taxi driver Li Max Joy, an Australian citizen of Indian descent, holding an OCI (Overseas Citizen of India) card has said the racial mood in the country is changing.

Having been in Hobart for the past eight years with his family, Li is studying nursing part time and drives taxis on weekends.
He says he was physically attacked between 4.30am and 5am on Saturday 25 March by three teenage boys at the local McDonald’s on Argyle Street in Hobart, Tasmania, with the group targeting him with racial slurs.
After entering the fast food restaurant for a toilet break, the 33-year-old was returning to his taxi to continue his shift when the alleged attack took place.
A group of five teenagers had been arguing with staff at the restaurant when their attention turned to Limax Joy.
“When they were coming out of the store, they saw and one of the boys called out, ‘Why you looking at us, you black Indian ****. Why are you here?’”
Without provocation, two other boys began punching Joy continually in the face. He began bleeding from the upper right area near his eye and was hit in the jaw.
He reported the incident to the police and was admitted to Royal Hobart Hospital with serious injuries.

He said the increasing racial hostility could stem from “the Donald Trump effect”.
“The racial mood is definitely changing. It is continuous now. Many other drivers have been abused but not everyone reports it to the police.”
Hailing from Kerala, Li Max Joy is adamant of the need for justice. “I will stand till my last breath to make sure they will be punished under Australian law,” he said.
He has also sent a detailed email to India’s External Affairs Minister Sushma Swaraj about the incident.