India and Pak vie for top ranking in cricket; Australia knocked off perch 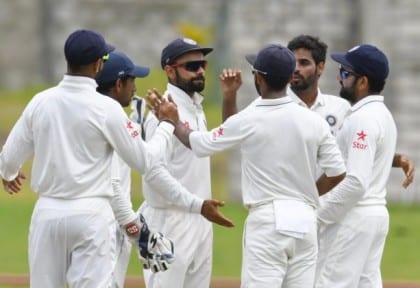 Australia has conceded its number-one ranking to India after Sri Lanka made a clean sweep of the three-Test series in Colombo yesterday 17 August.

Australia’s drop means India has become the number-one ranked side on the MRF Tyres ICC Test Team Rankings, while Pakistan has moved into second position – just one point behind.
To retain the number-one ranking, India will now have to win the fourth and final Test of the four-Test series against the West Indies, which begins in Port of Spain today, 18 August. India’s failure to win the Test will mean Pakistan will become the number-one ranked side for the first time.
If India wins the fourth Test, then it will finish on 112 points – one ahead of Pakistan – but it will end on 110 points if the Test is drawn or on 108 points in fourth place in the case of West Indies earning a consolation win.

India had started the year as the top-ranked side before Australia reclaimed the position following its 2-0 win over New Zealand in New Zealand.
For Pakistan, this is the second time in less than a year that it has peaked to number-two position. After defeating England by 2-0 last year in the United Arab Emirates, Pakistan had risen to second position for the first time since the current rankings system was introduced in 2003.