Hopes and expectations from a new UN Secretary General 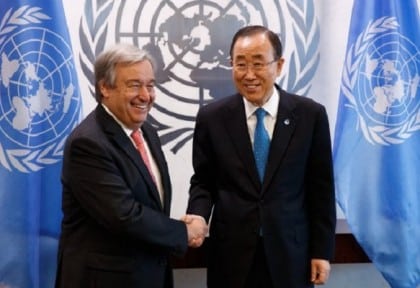 In the end, it was a unanimous election by acclamation of the new United Nations Secretary General (UNSG), Antonio Guterres. The winds of a new Cold War in the corridors of the UN did not deter the Americans and the Russians from agreeing to elect a politician, diplomat and administrator of proven competence.
Guterres has a formidable reputation of clean governance and strict administration, having cleaned up the United Nations High Commissioner for Refugees (UNHCR) as its head and having effectively led it during the greatest migration crisis facing Europe after World War II.

Earlier, as President of Portugal and as President of the European Council, he played an important role in finalising the Lisbon Treaty which ushered in a new and stronger European Union. His strong socialist credentials helped in swinging a positive vote from Vladimir Putin, during Russian presidency of the UN Security Council under Ambassador Vitaly Churkin.
How did it happen? There are few processes which are more opaque than the selection of the UNSG. The only guiding language is Article 97 of its Charter which states: “The Secretary General shall be appointed by the General Assembly upon the recommendation of the Security Council.”
As a result, the selection is subject to the veto of any of the five permanent members of the Security Council. Given the worsening relations between the Russians and Americans, there had been talk of the use of a Russian veto in case a European candidate would emerge in the lead. There had been speculation early in the campaign for the need to elect a female Secretary General. Because of the informal regional rotation scheme, many commentators had speculated that the next UNSG should be from the Eastern European Group, as that region has never produced a Secretary General.
There were several factors that worked in favour of Guterres. The initiative by the earlier President of the UN General Assembly (UNGA), Mogens Lykketoft, to usher in a more inclusive and democratic selection process through the holding of a series of informal dialogues and meetings with all potential candidates from April 12 to 14, 2016 worked dramatically in favour of Guterres.

In contrast, the leading female candidates and notably Director General, UNESCO, Irina Bokova of Bulgaria, did not fare well in the two-hour meeting slot to present her candidature. Nor was she favoured by her own government, which put up another woman candidate against her, or by the EU whose two Permanent Members, UK and France, reportedly repeatedly used the “discourage” votes in the straw polls.
Guterres’ strong performance answering questions before the General Assembly had already helped to propel him to first place among the 13 candidates vying for the job in the informal straw polls in the Security Council.
As a result, when the last Security Council straw poll was held on October 5, 67-year-old Guterres emerged as the presumptive nominee, with 13 ‘encourage’ votes, two abstentions and no ‘discourage’ vote in this sixth round. The Russians had blinked!
Subsequently, the 15-member Security Council voted for Guterres by acclamation and forwarded his name to the General Assembly on October 6. The 193 member states of the UNGA formally elected him by acclamation on October 13. Guterres will take over as the ninth UN Secretary General from Ban Ki-moon on January 1, 2017, soon after the polarising election of the US President.

Speaking shortly after his selection, Guterres expressed “gratitude and humility” at his election. He vowed to “serve” those most vulnerable, including victims of conflict, terrorism, violation of rights and poverty and pledged to make the pursuit of peace in a conflict-torn world his “over-arching priority”. He noted that the United Nations has “the moral duty and the universal right” to ensure peace and he would be promoting a new “diplomacy for peace” advocating dialogue to settle disputes.
Asked pointedly by the BBC regarding a role for the UNSG in settling the Syria conflict, he said he will do his best before taking over the reins to prepare “to act as a convener, an honest broker, someone trying to bring people together” in conflicts and crises from Syria to Yemen to South Sudan. Guterres acknowledged that he is not only fully aware of the challenges the United Nations faces but the limitations surrounding the Secretary General’s role.
According to informal, high-level sources, India which has already welcomed his election, is of the view that the new UNSG will play a positive role on those issues which are of vital importance to India, including UN Security Council reform (where his role admittedly is limited), as well as on terrorism, Pakistan and the Kashmir issue.

Successive Secretaries General, including Ban Ki-moon, have refrained from raising the Kashmir issue in their annual reports to the General Assembly. Guterres, who has an India connection since his wife is from Goa, is expected to continue this practice. He is fully aware of Indian sensibilities and had visited India to seek New Delhi’s support for his election early in the campaign.

From India’s perspective, in a difficult international scenario and with increased tensions with Pakistan, the expectation is that the new UNSG-designate would focus on crises situations in the Middle East which are directly impacting international peace and security. With his experience in UNHCR, he is also expected to play a positive role in slowing down the steady flow of migrants into Europe. Finally, his election also demonstrates that despite the prevailing tensions between the Russians and Americans, they are still able to agree – if the situation warrants. This is a positive sign which the new Secretary General should use to his advantage in the interests of a multipolar and secure world.