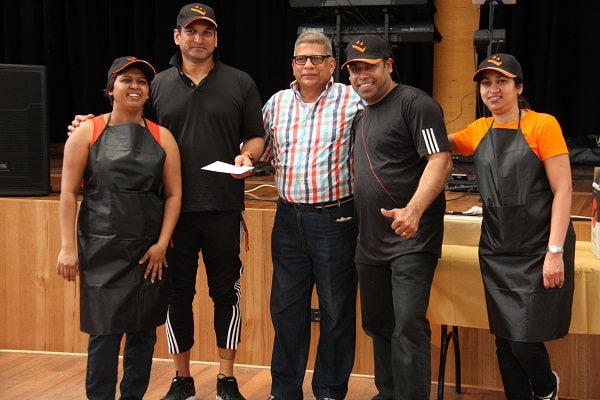 It was all a wide array of Goa, Goans and Goan culture down under as the Goan Association of Australia Inc (GAA) conducted its third Goan Food Festival 2017 at the Menzies Hall in Dandenong North, Australia.

It was yet another successful event as almost 450 people attended the festival, which consisted of Goan music, cuisine and art. Shezwan SOS entertained the crowds with Konkani, English and Portuguese music.

Saligao was adjudged the winner of the best stall at the competition, for the third year in a row.
The stalls were judged on their props, evidence of Goan connection at the stall by way of artefacts, display of food items, menus and overall presentation. Stall member Joseph and Terence along with their respective teams were commended for their efforts and their ongoing patronage year after year.

This year, the festival had two new stalls, Sarojini DeSa representing the Tivim stall, and Oliver Fernandes representing the Carmona stall.
Councillor Zaynoun Melhem and his wife Caitlyn of the City of Greater Dandenong visited the festival and were impressed with the display of Goan tradition and the large response from the community.

He has promised to step up the ongoing commitment from the City of Greater Dandenong towards the association so it can continue to flourish, grow and showcase Goa and its rich culture.
“We received some very positive feedback, which is gratifying and greatly appreciated,” said GAA President Gerard Lobo. “People thanked us for this opportunity that brought them some of our traditional delicacies they had not tasted in years! It brought back childhood memories for many, and for us it was great to showcase the best of Goan cuisine.”