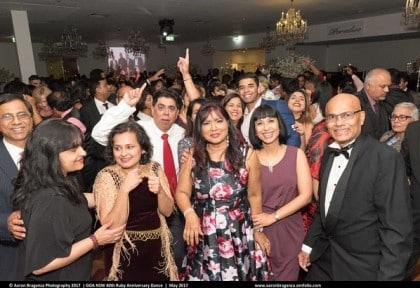 Their love for Goa and all things Goan were amply showcased, as members of the Goan Overseas Association (GOA) of NSW celebrated the association’s grand Ruby Anniversary recently.
Tracing GOA NSW’s foundation down under, President Tony Colaco took shared the fascinating journey of the association, much of which was not known to many.

Colaco recalled that in the ‘70s, after the Australian government abandoned the White Australia policy and had relaxed immigration rules, Alvito Coutinho threw a party for relatives and friends to mark his daughter’s birthday. The conversation got on to the limited social life in the big metropolis of Sydney. To connect with fellow Goans, they decided to organise a dance and see if it would bring the community together. To their surprise, they were inundated with bookings. The dance was a grand success and led to the formation of the GOA NSW in February 1977.
Acknowledging the contributions of the founding members, Colaco led the guests in saluting those stalwarts.
He also mentioned the men and women who, through the years, had shouldered the responsibility to serve the community with distinction, while also lauding his executive committee for their dedication to the Goan community.
What began as a simple dance that gave the GOA its first steps has, over the decades, led to a long and wide repertoire of events that includes Christmas and anniversary dances, Australia Day picnics, Karaoke and Fish Curry nites (KFC), annual sports day and golf tournaments.
Awards such as the ‘Goan of the Year’ and HSC awards were launched to showcase the contributions to the wider community and to honour excellence. To prepare the leaders of future, the GOA Toastmasters Club was formed to foster better communication and leadership skills.

The GOA NSW High Achiever 2016 HSC awards, sponsored by the Commonwealth Bank of Australia, were won by Stephanie Noronha and Kelly-Ann D’Sylva.
Reflecting on her experiences, Lizanne Sequeira, who recently visited Goa through the “Know Goa Programme” organised by the Government of Goa, shared that Goa is not just the land of beaches or Xitt-Kodi, but is an experience and feeling that lingers on.
President of the GOA Youth group Dr Clinton Colaco said he felt fortunate to lead his fellow youth in celebrating Goan culture. Through various events, Dr Colaco and his team have been steering the youth in continuing the legacy of the stalwarts before them. With Konkani language classes, they have ensured that Konkani continues to live on among the future generations.

While raising the toast, Tony Colaco celebrated the past, cherished the present and welcomed the future.

The dance floor was later thrown open and 400 guests swayed well into the night to the music of the band Moon Shine Drive playing their golden oldies, DJ Raj with modern hip hop music and Malcolm Britto with the golden oldies Portuguese/Goan songs.
Sipping on some great spirits and a delectable three-course meal, it was a night to cherish. A slide show displayed in the background traced the journey of GOA NSW since its inception.
Among others present at the function were presidents from inter-state GOA associations: Tony Mendes (Club de Goa, Brisbane) and Gerard Lobo (GAA Melbourne), as well as presidents from the Anglo-Indian Association, Melroy Farquharson (NSW) and Joe Bailey (Canberra) and Max French, chairman ARAIA (Australian Rangers Anglo Indian Association).