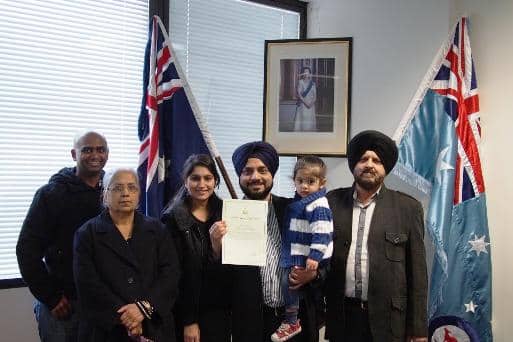 Most of us are aware of acts of bravery and valour by Sikhs. They figure prominently in the list of Victoria Cross and St. George Cross winners and the Sikh Regiment in the British Army has always had a sterling reputation. It is in keeping with this tradition that the first turbaned Sikh (wearing a turban as opposed to a bearskin) was appointed as a Guardsman in Buckingham Palace as recently as December 2012.
Not surprisingly, Royal Australian Air Force (RAAF) has scored a first by recruiting a turbaned Sikh from Melbourne. It is a matter of great pride for the 72,000 strong Sikh community in Australia. Sikh workers and migrants have earned their stripes as “Cameleers” and “Banana Plantation” workers since the early 19th century, but the profile of a typical Sikh migrant has changed since 1973. Australia has received a large number of Students and Professionals in all walks of life. As per the 2011 census, Melbourne has the distinction of having the biggest Sikh population.
It is appropriate then that 32-year-old, Inderjeet Singh Sodhi from Melbourne has the distinction of being the first turbaned Sikh to be inducted into Royal Australian Air Force. After having successfully completed his interview and Psychometric testing he has signed up to his new career and will commence his general training shortly. His interviewers recommended his appointment even though it took three months for his approval.
Inderjeet Sodhi has finally received approval from the Authorities to retain and continue his religious belief as a traditional Sikh and a special badge will be created to be worn with his turban. He will receive comprehensive training for the next 5-6 months before commencing his assignment, which could involve general administration, human resources or operational work.
Inderjeet Sodhi moved to Australia in 2004 after completing his Bachelor of Pharmacy degree from Dehradun to pursue his post-graduate studies in Commerce. He obtained a Master of Commerce Degree from Deakin University before applying for the RAAF.
He is married to Gurleen and has a 2-year-old son. Gurleen has received specialist training as a nursery teacher and  works casual /part time as a child carer.
Inderjeet’s parents arrived in Australia to attend his initiation in RAAF. They have blessed his career choice and are proud that he has chosen to serve his country of residence. His only sibling is his younger sister who continues to live in India. He and his immediate family have become naturalised Australians in 2007 as it would be a pre-requisite to serve in RAAF.
Inderjeet is very proud of his success, and looks forward to wearing the RAAF Uniform with pride. He hopes to become a shining example to his peers by working hard to achieve an excellent service record.  His goal in life is to be a leader of men and go as far as he can in the annals of RAAF.  His favourite sport is Cricket, but since settling in Melbourne he has followed AFL and his favourite team are the Geelong Cats.

Amendment: The first turbaned Sikh to enlist in the Royal Australian Air Force was Jagmeet Singh who is a Leading Aircraftman (LAC) currently serving at 37 Squadron (37SQN) at RAAF Base Richmond. The member enlisted in Melbourne on 2 June 2009.