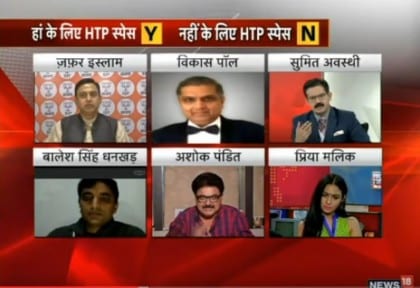 The inclusion of Pakistani artists on the guest list at the upcoming International Film Festival and Awards of Australia (IFFAA) saw some community members up in arms. Even Indian television channel News 18 weighed in on the debate

The growing anger in India against recent Pakistani atrocities in Kashmir has now reached Australia.

An upcoming film festival in Sydney has raised the ire of some members of the Indian community here because it involved the participation of Pakistani artists.
The Pakistanis will now not be part of the event.
Invited Pakistani artists Ali Azmat, Faysal Qureshi and Fakhr-e-Alam have all publicly endorsed the Muslim agitation in Kashmir to rise up against India, according to the website satyavijayi.com.
Two members of India’s defence forces were killed in the Krishna Ghati sector of Kashmir’s Poonch district on 1 May. Their bodies were found mutilated, with one beheaded.
Even as Pakistan continues to deny any involvement, sentiments run high amongst Indians at home and overseas.
This week the mortal remains of the Indian Army’s Naib Subedar Paramjeet Singh and the BSF’s Head Constable Prem Sagar were consigned to the flames in their home towns Tarn Taran in Punjab and Deoria in Uttar Pradesh. Pakistan intends to go ahead with its plan to hang an Indian citizen it accuses of spying.
Pressure has been mounting on the government of India to ‘give a fitting response’, and messages of support to the Indian army have flooded social media.
It is against this backdrop that the International Film Festival and Awards of Australia (IFFAA) prepares to flag off on 7 May.

The event, organised by Friends India Entertainment Australia Pty Ltd (which specialises in film distribution and events), is advertised as featuring film screenings, an award show with performances, and masterclasses.
A huge list of stars from India’s entertainment industry have been advertised as attending, including Arjun Rampal, Sonu Sood, Hariharan, Dharmendra, Javed Akhtar, Jeetendra, Ileana D’Cruz and Sophie Choudhry, alongside some Pakistani and Nepalese artists
“If Pakistani artists are involved in this event, we will organise a protest,” Balesh Singh Dhankar, President of the Overseas Friends of BJP Australia, told Indian Link on 4 May.
“This is a shocking and shameful addition to the event. We reject attending an entertainment event that invites guests that disrespect the soldiers of our motherland who died saving our loved ones.”


Indian Link contacted Vvikas Paul, the Festival Director and the director of the company Friends India Entertainment, who denied all knowledge of the invited Pakistani artists’ backgrounds.
“I am just organising a film festival and awards night as a multicultural activity to promote Indian and sub-continent cinema, with artists coming from India, Pakistan and Nepal,” he said. “I just want to clarify that I am not supporting any Indian, Pakistani or Nepalese artists or their deeds; they are just visiting artists in my event.”
When we followed up with more information about the statements made by his guests, Paul refused to take any responsibility. He did not confirm if the Indian artists or the Indian community in Australia are aware of what his Pakistani guests have said regarding Kashmir.
“I am doing this solely for commercial reasons and as to what these people say is not my responsibility,” he said.
Meanwhile, as the anger of some members of the community boiled over regarding the Pakistani artists, the debate was relayed back to India and played out on a major TV news channel.
Balesh Dhankar featured in a debate on Indian news channel News 18, helmed by TV personality Sumit Awasthi.
Also on the panel was Vvikas Paul.

On the show, Vvikas Paul claimed that he had cancelled the appearance of the Pakistani artists invited to the event, seeing the sentiments in the community.
“I organised the event as a sub-continent film festival, but I understand now and I will not be calling the Pakistani artists,” he said.
Awasthi asked him to confirm this decision, and Vvikas acquiesced.

Hours later, Vvikas posted on his Facebook page, “Looking on to current sensitive situation, we have decided not to bring artists from both countries together on one platform (sic)”.
The Sumit Awasthi talk show was enough to have the Bollywood artists coming to Sydney reconsidering as well.
Balesh claims that Sonu Nigam, Rishi Kapoor and Shakti Kapoor have since reconsidered their attendance, and others are being urged to reconsider as well.
“This festival is organised on the money put up by Indian-origin sponsors, and it is largely Indian ticket buyers that are going to be at the event. Their resources cannot go towards supporting Pakistani artists who incite (communal divide)”.
He is also urging the sponsors to reconsider as to where their sponsorship dollars are going.
Indian Link spoke to one of the sponsors, Rupesh Singh of Education Centre of Australia, who confirmed that no Pakistani artist who has made anti-India statements will be attending the Festival.
Balesh Dhankar is sticking to his position.
“Hamara intent yeh hai ki koi bhi Pakistani artist na aaye. Agar woh aayen, to koi Indian artists na aayen. Our intent is that no Pakistani artists must attend this event. If they do attend, then Indian artists must withdraw.”
As the situation unfolds, the early reactions from the community are varied. Some people claim they will seek refunds on tickets purchased, while others claim politics must be left out of a non-political event.
Meanwhile, the debate has picked up again in India whether sporting and cultural relations between India and Pakistan should be shelved as the two nations continue to fight politically and militarily. The call has been made on many occasions that perhaps such relations can play a part in the building of bridges and in the ultimate normalisation of relations.
Regardless, these exchanges are currently at a halt as the most recent issues are sorted out. In this context, the question remains, should diaspora communities tread their own path, or follow the sentiments of their countrymen back home?
- Advertisement -
Share
WhatsApp
Facebook
Twitter
Linkedin
Previous articleFilm on Maharaja Duleep Singh wins award at film festival in Houston
Next articleIFFAA Cancelled