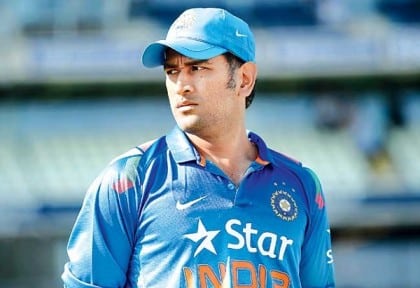 Talismanic Mahendra Singh Dhoni stumped every cricket fan on Wednesday when he informed the Board of Control for Cricket in India (BCCI) that he is stepping down as the skipper of India’s One-Day International (ODI) and T20 International sides, ending a trophy-filled era.

The 35-year-old had already retired from Test cricket in December 2014 but continued to lead the national team in the shorter formats of the game.

Dhoni, who had led India to the International Cricket Council (ICC) World T20 title in 2007, to the World Cup victory in 2011 and lifted the Champions Trophy in 2013 also took India to the zenith of the Test rankings during his tenure. He is the only captain in world cricket to win each of the ICC trophies.

The Ranchi wicketkeeper-batsman will, however, be available for selection for the three ODIs and T20Is against England, starting January 15, the BCCI informed.

“Mahendra Singh Dhoni has informed the BCCI, that he wishes to step down as the captain of the Indian Cricket Team from the One Day Internationals and the T20 Internationals formats of the game,” a statement from the board read.

“He will be available for the selection for the One Day and T20I series against England and the same has been conveyed to the Senior Selection Committee.”

The BCCI’s senior selection committee will meet on Friday to select the team for the limited overs series against England.

Commenting on the development, BCCI Chief Executive Officer (CEO) Rahul Johri said: “On behalf of every Indian cricket fan and the BCCI, I would like to thank M.S. Dhoni for his outstanding contribution as the captain of the Indian team across all formats.”

“Under his leadership, Indian team has touched new heights and his achievements will remain etched forever in the annals of Indian cricket,” he added.

He immediately stamped his authority at the international stage when he smashed 148 in only his fifth match, against a Pakistan attack that didn’t know what had hit them.

He quickly rose up the ranks in Indian cricket to take the reins of the national T20I side in 2007, before becoming the ODI captain after Rahul Dravid relinquished the post.

He eventually ascended to full-time Test captaincy once the then Indian captain and current India coach Anil Kumble retired.

Dhoni’s biggest triumph was winning the World Cup in 2011, which India won after 28 years owing to his exemplary batting display in the final and calm and methodical leadership, despite the added pressure of playing at home.

He also led the side to the final of the 2014 World T20 in Bangladesh, in which India lost to Sri Lanka. Dhoni successfully led India to the 2015 World Cup semi-final, where they lost to hosts and eventual champions Australia, effectively ending India’s 11-match winning streak in the World Cups.

During the course of the tournament, he also became the first Indian captain and third overall to win 100 ODI matches.

In 2016, Dhoni led India to the Asia Cup T20 title by beating hosts Bangladesh in the final and also guided the side to the semi-finals of the World T20, where hosts India lost to the eventual champions — the West Indies.

He also holds the record for most matches as captain of an international side, with 331 games across formats.

His last series as captain came against New Zealand at home, where he led the Indian side to a 3-2 series win.

Although the next captain was not announced, Virat Kohli, currently captaining the Test team, is the likely front-runner to replace Dhoni.

“Trying to think like #Dhoni. Kohli most likely 2019 World Cup captain, so best that he leads in the Champions Trophy so best he starts now.”