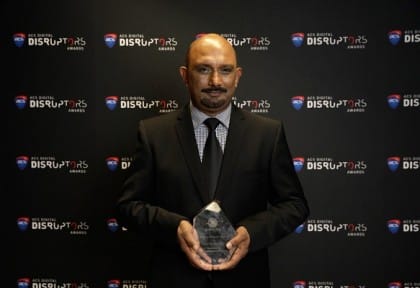 IT professional Kumar Parakala was recently announced as the winner of the inaugural International Digital and ICT Professional of the Year award at the 2016 Digital Disruptor Awards.

The awards were hosted by the Australian Computer Society (ACS) to honour the efforts of Australia’s ICT professionals. ACS is Australia’s peak professional association for the Information and Communication Technology (ICT) sector, and a member of South East Asian Regional Computer Confederation (SEARCC) – a forum of national IT professional societies in the Asia Pacific, comprising a membership of over 30 countries. SEARCC President Dr Nick Tate, announced the winners of awards on behalf of SEARCC member societies and the executive council.
“I am greatly humbled and privileged to be receiving this award. I would like to offer my sincere gratitude to those who have nominated me, as well as SEARCC and ACS. It demonstrates the tremendous goodwill, support and friendship of many who have enabled my professional success over the last two decades,” Parakala said in his acceptance speech.
“The digital revolution is profoundly changing the way people work and live with huge social, economic, political and cultural implications. We are all embarking on a very exciting journey,” he added.

Kumar Parakala is co-founder and managing director of Technova, an IT firm supporting the ambitions of companies to exponentially grow their digital services.
“We are delighted to honour the achievements of top professionals in the Asia-Pacific region. The distinguished judging panel received more than 100 nominations of highly successful business and academic leaders from the region,” said Yohan Ramasundara, SEARCC secretary-general.
“Our congratulations to Kumar Parakala for winning the International Digital and ICT Professional of the Year 2016 in recognition of his outstanding contributions to private and public sectors as a thought leader and trusted advisor.”
Kumar Parakala has participated in many research and evidence-based discussions, making thought-provoking observations in the areas of ICT skills and development, digital economies and government policies. One significant area of advocacy has been his research-based views on broadband and ways for Australia to engage with its Asian partners for economic development. He is recognised throughout the Asia Pacific region as a thought leader in the sector.

Born in Tanuku, Andhra Pradesh, Parakala gained a Master’s of Science (Honours) degree from Birla Institute of Technology and Science. He moved to Australia in 1991, and commenced a Master’s of Information Systems Program at Central Queensland University.
Realising the need for better IT skills within businesses in Queensland motivated him at the age of 23, to start his first entrepreneurial venture, the Centre for Business Information Management (CBIM) in collaboration with the Central Queensland University. The venture not only helped him fund his education, but contributed to funding scholarships for several students.
Parakala has devoted a great deal of his personal time and resources to public works. Since the mid-90s, he has been involved in providing voluntary advisory governance support, and for almost a decade, has frequently contributed to the government’s deliberations on the ICT industry.
“At the ACS and SEARCC Digital Disruptors Awards, we celebrate the remarkable accomplishments of some of the most talented innovators, entrepreneurs and industry leaders,” said Professor Michael Blumenstein of the University of Technology, Sydney. “We are very pleased that Kumar’s distinguished contributions gained recognition through the prestigious International Digital and ICT Professional of Year award.”

More than 1000 industry, business and political leaders including ministers, CEOs, entrepreneurs, heads of professional and industry bodies, and many international delegates were in attendance at the awards ceremony.
The Digital Disruptors awards program has turned the spotlight on the very best that Australia and the Asia-Pacific region has to offer.
Parakala led the strategic transformation of the ACS during his stint as National President from 2008 to 2010. He achieved many important milestones to improve ACS’s ability to represent and support the needs of ICT professionals in helping drive economic prosperity.
Parakala endeavoured to raise the profile of the ACS and exert influence at all levels of government, commerce and the community to build awareness and drive action on the issues of interest to its members and the ICT profession. He was recognised with induction to the Hall of Fame, and received Honorary Life Membership and Fellowship awards from the ACS.
This year, he celebrates 25 years in Australia with his partner Dr Paddy Parakala and daughter Sreya.