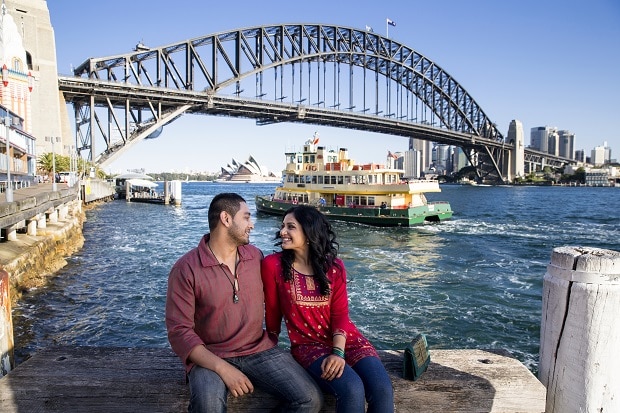 Reading Time: 3 minutesWill it be hugs all around as the new travel promotion is launched across India?

Destination NSW has decided to pick the low hanging fruit as it attempts to woo Indian tourism to this state.

Launching its campaign Jhappi Time, Destination NSW CEO Sandra Chipchase built up the need to use the connections of the Indians in NSW to attract their family and friends to this state and its major attractions. Alas, rather than seeking to reach out to the upper class travel-savvy Indians, Jhappi Time limits its campaign to those who may already be sold on the idea of visiting this Australian state.

Research by Tourism Australia Research (TRA) indicates that NSW received 77,700 visitors from India for the year ended Sept 2013. This was an increase of 9.4% over the previous year.

The Indian tourist market is growing. By 2020, the United Nations’ World Tourism Organisation forecasts 50 million outbound travellers from India. In fact by 2030, predicts a report by Amadeus, the 4.5 million Indians who travelled to the Asia Pacific region in 2011 will grow to a staggering 70 million. According to research, Indian travel preferences are changing and the younger affluent Indians are keen on experimental, eco and outdoor adventure tourism.

Destination NSW is the first Australian tourism body to target tourism from India.

The plan is to promote this digital campaign through online media, as well as through cinema advertising, where they were tested across different demographics. It will also support industry partners and travel wholesalers to promote travel packages and airfare offers to Indian travel agents and visitors.

The campaign is warm and fuzzy. It hinges on the values that regular Indians hold dear, such as family togetherness and the importance of education, and the sheer joie de vivre that typifies the Indian way of life. Sharma has cleverly used these Indian themes to sell his adopted home state to audiences in his native country.

Regardless, it does leave a few gaps in its missive. While the use of local Indian Australian people in the ads helps identify with the message, the campaign has resorted to the stereotyped Bollywood image, rather than to build on what the young Indian affluent traveller is looking for – adventure, excitement, eco-tourism etc. The glaring absence of cricket tourism is also notable, especially in the lead up to the World Cup.

A major issue which holds Indians back in travelling to Australia is the travel time, but with more flights and connections between the two countries now in place, this should not be as much of a concern. Unfortunately, this facet has totally been ignored in the new campaign. The tyranny of distance still persists in the minds of Indians wishing to travel here. The target of doubling the Indian visitors to NSW by 2020 is rather tame especially if growth is expected at 9% pa. Doubling the figures will almost be achieved by organic growth, rather than being campaign-driven.

Destination NSW is to be commended for taking this initiative to bring more Indians ‘down under’. The relationship between India and NSW is improving constantly with Premier Barry O’Farrell making three visits to India in three years, as well as the recent visit by Minister Victor Dominello to build on the connections and agreements reached during the Premier’s visit.

NSW has been a bit slow in working on attracting the Indian tourism dollar, with Victoria having stolen the march on this.

Whether Sharma’s jhappi turns out to be the proverbial jaadu ki jhappi for Destination NSW, only time will tell. Meanwhile, Indians ‘down under’ need to get on their phones and start spruiking the message of welcoming family and friends here. Your state now needs you.