Dancing their way to the top 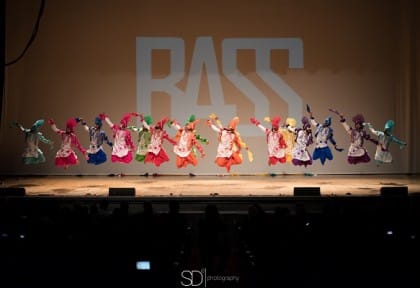 The sheer energy of a Bhangra performance is enough to get your feet tapping and shoulders moving.
Combine unparalleled energy with creative choreography, fast music, loud lalkaare and pure passion, and you have BASS – the Bhangra All-Stars Sydney boys.
The Sydney-based Bhangra troupe has taken out third place at the world’s largest and most prestigious Bhangra competition, Bruin Bhangra 2016 held in Los Angeles in late May.

Their eight-minute routine was colourful and powerful, with perfect synchronisation. As close to the traditional elements of Bhangra as possible, seamlessly using cultural props such as sapps and daangs, it incorporated a tribute to the folk Punjabi tale of Jagga Jatt. To keep audiences captivated, modern day elements such as a ‘breaking news’ opening and the use of LED lights on their costumes were integrated in to their set.
Having set a high standard, it is no wonder that these Australian boys made their mark on the international stage, beating teams that they had grown up watching and had idolised.
Bruin selector Jasmine Toor said BASS’s “creativity, authenticity and willingness to bring something both unique and memorable” was what won the selection committee over.
BASS captain Gobind Khangura told Indian Link, “It was wonderful to dance in front of a cheering audience and present what we spent months tirelessly preparing for.”
Gobind describes his team as a “brotherhood” formed by “a group of friends who have been dancing together since childhood,” and are able to “enhance their bond through their [shared] passion” for Bhangra.

The troupe was launched in 2011, and since then the boys were determined to take the international stage. Bhangra is essentially considered a sport in America, with teams from across the country competing at numerous competitions throughout the year. American teams have been dancing and competing for many years and the Australian Punjabi youth follow the American Bhangra circuit via YouTube. The Bruin competition itself began in 1998 and is considered the ‘grand finale’ of the Bhangra season.
BASS’s journey to LA involved “huge learning curves” through experience by competing at various competitions locally, nationally and internationally.
Gobind revealed, “The preparation for Bruin was intense, to say the least. It involved strenuous and highly demanding practice sessions six times a week, while juggling full time work and/or university at the same time.”
The youngest Bruin dancer Jaydeep Mavi, 15, says that it was all worth it as he has not only made “amazing friends” but has learnt “about maturity, teamwork and [to] always smile, wherever you go.”

With 16 boys on the Bruin stage, and many more behind the scenes, BASS began competing nationally and internationally in 2012, winning or placing at Bhangra competitions such as Nachda Punjab, Bhangra Down Under in Melbourne, World’s Best Bhangra Crew in New Jersey, and Harbour City Bhangra. Back home in Sydney, their fans, friends and fellow Bhangra enthusiasts followed the boys’ Bruin journey faithfully by live streaming their performance – some had the sound muted sneakily on laptops in lecture halls, or on their mobile phones hidden under the desks at work.
Considering that these boys have grown up in Australia, it is inspiring to see their dedication to promoting an art form from their cultural heritage. The Punjabi folk dance is a part of their roots and the BASS logo even features the phrase “Folk Pride.” Gobind gives the credit to the parents, who have kept their children “involved and attached with our culture since a very young age.”
“We are very grateful for being given the opportunity to represent our Australian Bhangra family,” he said with humility. “We are glad to have been able to inspire and encourage so many to follow their dreams or maintain a link with their culture.”
Photo: S.D. Photography, San Francisco