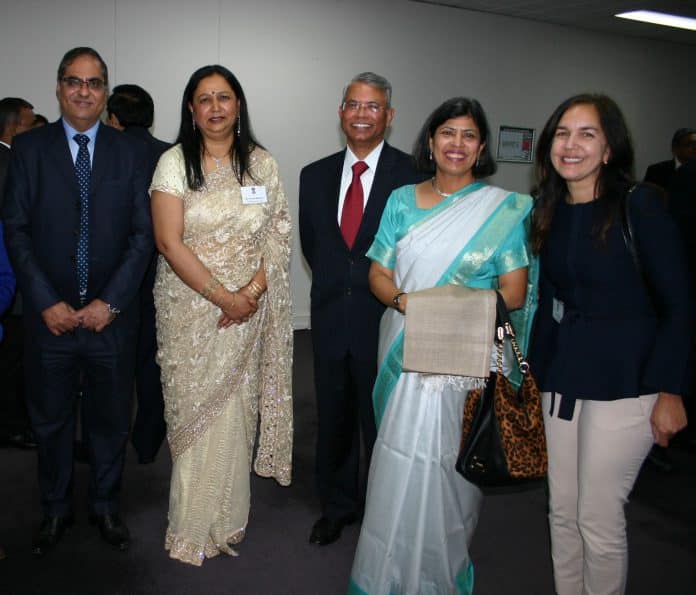 The Indian community in Melbourne got together recently to offer a warm farewell to Rakesh Malhotra, the Consul General of India in Melbourne. He has now been appointed as the High Commissioner of India to the Republic of Cameroon and is scheduled to commence his assignment shortly.
Mr Malhotra was appointed as the Indian Consul in Victoria and Tasmania after the departure of former CG Ms Manika Jain. He worked as Deputy Secretary in the Ministry of External Affairs, before joining the consulate in Melbourne.
In the past, he served in the Indian diplomatic missions in Oman, Greece, Kyrgyzstan, Suriname, Canada, South Africa and Peru.
During his farewell speech, the Consul General shared the fond memories he and his family had during his time in Melbourne and Tasmania. “I will always remember Australia as a highlight of my career because of the support I have received from the community and the relationships built by me and my wife,” said Mr Malhotra.
Indian President Ram Nath Kovind’s historic visit to Australia late last year was a clear highlight of the Consul General’s tenure. He said he had thoroughly enjoyed his term in office, and was able to fulfil his aim to support the Indian community in Melbourne, create bilateral ties with Australia and support cultural, political and academic exchanges.
At the reception held at the consulate office in St. Kilda, many speakers took to the stage to bid him farewell and thank him for his contribution and support.

Generous tributes flowed from Kaushalya Vaghela, Ted Baillieu, Monica and Rakesh Raizada, Prof Ajay Kapoor, Subhash Sharma, Neeraj Nanda and Prabhat Sangwan who was also the MC for the evening.
He stated that Mr Malhotra was known for his infectious laughter and the consulate staff would miss his wholehearted guffaw.
According to Indian High Commissioner Dr Ajay Gondane, Mr Malhotra was very well liked and respected within the community and has left some good footprints in Australia. He remarked that the large turnout at his farewell was testament to the love and admiration Mr Malhotra commanded from the community.
“Mr Malhotra has done very good work here,” said Mr Gondane in his formal speech, before launching into some Hindi shayari. He was confident that Mr Malhotra would be equally loved for his exceptional qualities in Cameroon.
Lisa Singh, Labor Party member of the Australian Senate for Tasmania thanked Mr Malhotra for his ongoing involvement with the Tasmanian Indian community while Tanvi Mor, founder of Mor Events, spoke about his inspiring influence on her.
The reception continued with delicious food provided by a local Indian catering company. Mr Malhotra and his wife Mrs Neeraj Malhotra met with the many leaders, community representatives and media who were present to wish him well.
Mr Raj Kumar, Consul General from Jalalabad, has been appointed as the next Consul General of Melbourne and will be joining the consulate shortly. He has served in various capacities as the Minister of External Affairs, Government of India, including diplomatic missions in Libya, Malaysia, Kenya, United Kingdom, Nigeria, Panama and Sri Lanka.