Children for peace, peace for children 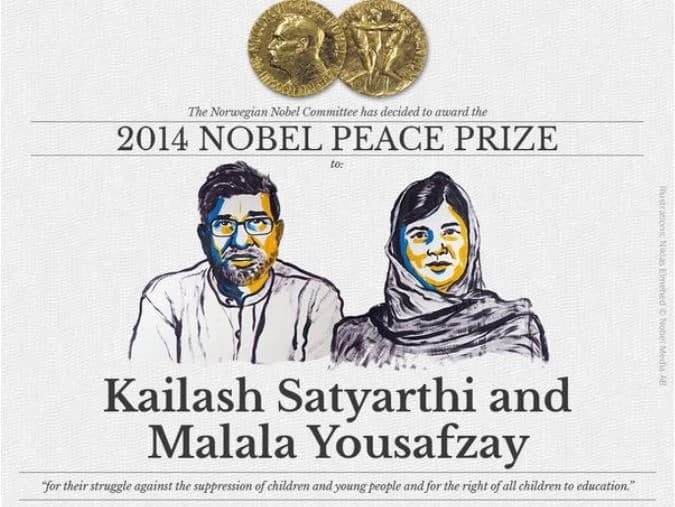 Kailash Satyarthi, India’s best known face against child labour, was announced the winner of this year’s Nobel Peace Prize along with Pakistani teenager Malala Yousufzai “for their struggle against the suppression of children and young people and for the right of all children to education”.

Satyarthi’s Bachpan Bachao Andolan (BBA, or Save Childhood Movement), has for years not just campaigned against child labour but raided factories and sweat-shops that employ children illegally, turning them into virtual slave labour and often paying them a pittance for hours of hard toil.

The Norwegian Nobel Committee said that showing great personal courage, Satyarthi, “maintaining Gandhi’s tradition, has headed various forms of protests and demonstrations, all peaceful, focusing on the grave exploitation of children for financial gain. He has also contributed to the development of important international conventions on children’s rights”.

Indian President Pranab Mukherjee and Prime Minister Narendra Modi led a proud nation in congratulating the Delhi-based 60-year-old activist, who pledged to keep fighting to secure freedom for the hundreds of thousands from poor families who slog away as child workers in pitiable conditions.

Born in Vidisha, Madhya Pradesh, Satyarthi, who gave up a promising career as an electrical engineer when he was 26, expressed hope this recognition would strengthen the struggle of child labourers.

“This award is a dedication to all those people and activists fighting for the cause of children. I hope this will give strength to the struggle of children working as labourers,” Satyarthi told IANS.

The lanky Indian, who is usually dressed in a simple khadi kurta-pyjama, shares the Nobel Peace Prize with Malala Yousufzai, the Pakistani teenager who stood up to the Taliban and survived a near fatal shooting.

Malala was shot by a Taliban gunman as she took a bus home from school in Pakistan’s northwest in 2012. She went to Britain for treatment.

The Nobel Committee regards it as “an important point for a Hindu and a Muslim, an Indian and a Pakistani, to join in a common struggle for education and against extremism”.

It said there are 168 million child labourers in the world now. In 2000, the figure was 78 million higher. The world has come closer to the goal of eliminating child labour.

Satyarthi’s group has so far freed about 80,000 children from servitude, including bonded labourers, and helped in their successful re-integration, rehabilitation and education.

Officially, there are only about five million child workers in India. But activists say the actual figure is ten times as high.

President Mukherjee said: “The prize should be seen as recognition of the contributions of India’s vibrant civil society in addressing complex social problems such as child labour and the important role played by them in collaboration with the government in the nation’s efforts to eliminate all forms of child labour in the country”.

Prime Minister Modi hailed Satyarthi for devoting his life to a cause “extremely relevant to entire humankind”. He added, “The entire nation is proud of his momentous achievement. I salute his determined efforts”.

Modi also congratulated Malala, saying her “life is a journey of immense grit and courage”.

Amnesty International praised Satyarthi and Malala for promoting the “rights of the world’s most vulnerable children”.

“Satyarthi has dedicated his life to helping the millions of children in India who are forced into slavery and work in torrid conditions,” it said.

Satyarthi is credited with the enactment of national and international legislations, treaties and conventions besides constitutional amendment on child labour and education.

Terming the Nobel Peace Prize being awarded to Satyarthi as a “big and historical” occasion, Shireen Vakeel Miller, advocacy director with NGO Save the Children, told IANS: “This event will bring into the spotlight the problem of child labour in India.”

Said Meenakshi Kohli, well known child rights activist: “It is great that a person who has contributed so much to eradication of child labour has won the Nobel Prize. But we have to continue with the momentum gained and not forget the issue once the spotlight goes.”

Malala ‘really happy’ to share Nobel prize with an Indian

Pakistani activist Malala Yousafzai said she is “really happy” to be sharing the Nobel Peace Prize with a person from India and both have decided to invite Indian Prime Minister Narendra Modi and his Pakistani counterpart Nawaz Sharif for the award ceremony in Oslo.

Speaking at a news conference in Birmingham where she now lives, the 17-year-old girl said she and Satyarthi decided to invite Modi and Sharif to their award event to be held in December in a bid to improve relations between the two leaders, BBC reported.

They will receive a medal and US$1.4 million dollars in prize money.

Revealing to reporters that she heard the news after being called out of her chemistry class at school, Malala gave a call to children to “stand up for their rights” .

The Pakistani activist, the youngest ever recipient of the prize, said she was “honoured” to receive the award, saying it made her feel “more powerful and courageous”.

Despite her excitement, she said she attended her afternoon lessons in physics and English.

She thanked her father for “not clipping her wings” and said she was proud to have shown that “a girl is not supposed to be a slave”.

Dedicating the award to “all those children who are voiceless”, she said: “My message to children around the world is: stand up for your rights”.

US President Barack Obama congratulated both Malala and Satyarthi on winning the award, calling it “a victory for all who strive to uphold the dignity of every human being”.

“Malala and Kailash have faced down threats and intimidation, risking their own lives to save others and build a better world for future generations,” he said.

Satyarthi has maintained the tradition of Mahatma Gandhi and headed various forms of peaceful protests, “focusing on the grave exploitation of children for financial gain,” the committee said at the Nobel Institute.

Eighteen-year-old Manan Ansari has no idea what a Nobel Peace Prize is, but he is delighted to see a smile on the face of the most important man in his life, child rights crusader Kailash Satyarthi, who rescued him from the mines of Jharkhand when he was just eight, and who he proudly calls his “mother, father, friend, guide and confidante”.

“He means everything to me. If it was not for him I may have not been alive today,” says the boy who wants to become a doctor.

After being rescued, Ansari finished school in Rajasthan and is currently in Delhi at university.

Satyarthi’s BBA was one of the first NGOs to start work on child rights, and against child labour, in 1980. Touching the lives of thousands of young children, often from socially and economically vulnerable backgrounds, the group actively participates in rescue operations along with police and the labour department, and helps the kids reunite with their families.

BBA has also led successful campaigns against the use and sale of products in domestic and international markets that employ children to do the work.

For 22-year-old Suman Kumar Mahto, Satyarthi is a guiding light who has helped him become independent.

“I never imagined that one day I would become a graphic designer and earn enough money for not only myself but also my family,” says a proud Mahto, who now earns around Rs. 15,000 every month and sends a major share of his salary to his mother and brother back home in Bihar.