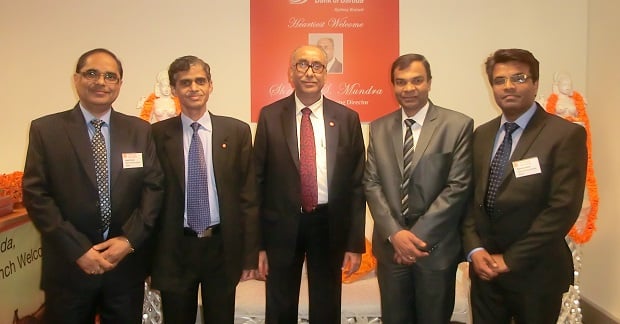 
“Retail business is not only in the metro cities of India but in the villages as well, where roads, television and mobile technology is going to drive growth,” SS Mundra, Chairman and Managing Director of Bank of Baroda told Indian Link in an exclusive interview in Sydney recently.
Mr Mundra was visiting Australia to take stock of the bank’s local operations and meet with its clients, customers and well-wishers. Although he is soon to retire, Mr Mundra’s passion and knowledge of banking was clearly in evidence during his interview.
“Yes, there has been low GDP growth in India but going forward, Bank of Baroda is well positioned to capture more business in the retail market. Of our 4,600 branches in India, about 40% are in the rural areas and about 25% are in semi-rural areas,” he revealed.
“There is currently a whole lot of urbanisation going on within India. It is as if the country is churning, and in fact, if you look at it from a satellite, India will look like a cauldron,” he added, somewhat illustratively. He spoke of the three big drivers being the roads, television and mobile technology.
“The roads are making transport easier, and places in the country which were cut due to seasonal conditions for months in a year, are now connecting to the local town,” explained Mr Mundra. “Television is creating awareness and encouraging lifestyle ambitions, and mobile technology is allowing for price discovery for selling commodities to the consumer,” he added. “The agriculture sector which suffered from disguised employment now has farmers who, with this new-found connectivity, have ambitions. They want a house in their nearest town, they want to provide education to their children, and they want to start a new business. Bank of Baroda is there to help them with all this,” he proclaimed.
Mr Mundra sees opportunities in the emerging middle class. “According to a latest survey, by 2015-16, up to 56.7 million households will upgrade to the middle class. That is a staggering 267 million people migrating from the lower class to the middle class, and there are great banking opportunities to consider,” he said. In fact, by March 2014, Mr Mundra’s ambition for the bank is to be a ‘TTB’ – a Rs10 trillion bank or a Rs10 lakh crore bank, with proper risk management.
“The platforms which will help achieve this goal is not only the retail lending in rural India, but also ramping up our alternative delivery mechanism by bringing in state of the art technology,” he averred.
Mr Mundra is quite dismissive about the threat from private banks to public sector banking in India. “Death notices for public sector banks were written in 1993-94 when licences were granted, then again in 2003-04. All that did was to make the public sector banks more efficient, and took away any complacent practices. New banks need time to scale up, which is not easy,” he claimed.
In fact, he feels that private sector banks feel more threatened by public sector banks.
Talking about rising inflation in India, Mr Mundra feels that this increase is largely due to two items, food and fuel.
“What needs to be fixed is the supplier side of things, and that will take time. There is a lot of wastage in the food chain which needs to be controlled. For fuel we are subject to international variation, but India does have vast energy resources,” explained Mr Mundra. “These need to be ramped up and yes, massive infrastructure investment is required in these areas. However, the good thing is that in the last four to five months, a lot of good work has been done by the government and I’m very confident that things will start looking up in a short period of time,” he asserts.
Mr Mundra urged settled NRIs to engage more with India and to bring their expertise to their country of origin, thus becoming a part of the ‘Indian Success Story’.
- Advertisement -
Share
WhatsApp
Facebook
Twitter
Linkedin
Previous articleGDP growth to hit 8% in 6 months: PNB chairman
Next article‘Tis the season to be silly! Festive stories