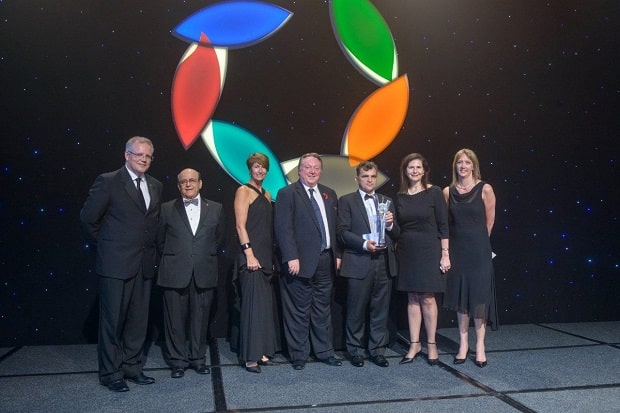 A Croatian man who arrived in Australia with only a suitcase has won the most prestigious prize at Australia’s longest-running national business awards.

Ivan Filipovic, who left Croatia before war was declared in 1991, started I&D Group to support his mother, father, and six siblings back home.

The formwork and construction company, based in Mulgrave, Victoria, is now a multi-million dollar business, with more than 450 employees.

Ivan won the Medium to Large Business Award at a gala ceremony at the Hilton Hotel in Brisbane on 9 October.

The daughter of political refugees in Colombia took out the Small Business category.

Jacqueline Arias, who arrived in Australia at the age of eight, is the brains behind Republica Coffee, based in Waterloo, Sydney.

Republica is the only Australian coffee company to have all of its products 100% certified organic and fair trade.

And the Business Manager of Maxx Engineering, Amanda Healy, has taken out the Indigenous in Business award.

With 20 years of experience in the mining industry in WA., Amanda says she’s proud of being an indigenous woman in an industry dominated by men.

Founder and Chairman Joseph Assaf stated that “ tonight is a chance to highlight this very model of global cooperation and to do so at the doorstep of G20 event. It is a fantastic opportunity to showcase the significant role that both early settlers and new settlers have played in our artistic, economic and social development. They have forged new pathways of success built on innovation, knowledge and expertise that has led to a flourishing of infrastructure, employment and economic sustainability.”

Founding and Major Sponsor NAB representative Cindy Batchelor, Executive General Manager, NAB Business said “These businesses play a fundamental role in our economy, and it is a truly outstanding achievement.”

“At NAB, we are passionate about our role in helping migrant and indigenous businesses succeed, and the awards are a wonderful way to recognise the tremendous success and diversity they contribute to Australia’s business culture.”

The Ethnic Business Awards, now in their 26th year, celebrate diversity and multiculturalism, and the achievements of migrants who come to Australia with a “suitcase full of dreams”.

The Awards are televised nationally on SBS and Aurora Community Channel: