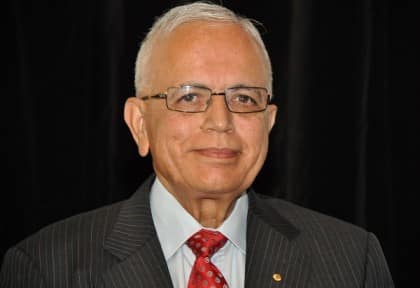 He is among 30 awardees announced in Bengaluru on 9 January at the Pravasi Bharatiya Divas (PBD).

Dr Harinath has been serving as the Chair of Multicultural NSW since 2014, after a stint as the Chairman of Cricket NSW in 2008. He arrived in Australia in 1971.
As a medical practitioner, as a cricket administrator and as a champion of multiculturalism, Dr Harinath has won much regard in his home state of NSW.
Indian-origin Portugal Prime Minister Antonio Luis Santos da Costa and Indian-born US diplomat Nisha Desai Biswal are some of the other high-profile winners.
The 55-year-old Costa, a Chief Guest at the three-day 14th PBD (Non-Resident Indian Day) celebrations, is the son of Goan father Orlanda da Costa.
As a senior Indian-American diplomat, the 48-year-old Biswal, who hails from Gujarat has been overseeing the US foreign policy and relations with 11 countries in the region from Bangladesh to Uzbekistan since October 21, 2013.
Costa and Biswal have been awarded for public service and public affairs.
Of the awardees, six are from the US, two each from Britain and United Arab Emirates (UAE) and one each from 27 other countries the world over.
Five other overseas Indians from the US sharing the honours with Biswal are Hari Babu Bindal for environmental engineering, Bharat Haridas Barai, Mahesh Mehta and Ramesh Shah for community service and Sampatkumar Shidramapa Shivangi for community leadership.
Priti Patel and Neena Gill are the awardees from Britain for public service.
Vasudev Shamdas Shroff and India Social and Cultural Centre from Abu Dhabi in the UAE are the winners for community service and philanthropy.
Two more organisations – Antwerp Indian Association in Belgium and Singapore Indian Association in Singapore have been honoured with the award for community service.
The other winners for community service are, Naseer Ahamed Mohamed Zackiriah (Brunei), Nalinkumar Sumanlal Kothari (Djibouti) and Ariful Islam (Libya).
Other two winners for public service are Pravind Kumar Jugunath (Mauritius) and Winston Chandarbhan Dookeran (Trinidad & Tobago).
Raghunath Marie Antonin Manet (France) and Sandip Kumar Tagore (Japan) bagged awards for arts and culture.
Other awardees are Mukund Bhikhubhai Purohit (Canada) and Susheel Kumar Saraff (Thailand) for business; Vinod Chandra Patel (Fiji) for social service; Lael Anson E. Best (Israel) for medical science; Tan Sri Dato Muniandy Thambirajah (Malaysia) for education & community service; Raghavan Seetharaman (Qatar) for business management; Zeenat Musarrat Jafri (Saudi Arabia) for education and Carani Balaraman Sanjeevi (Sweden) for medicine.