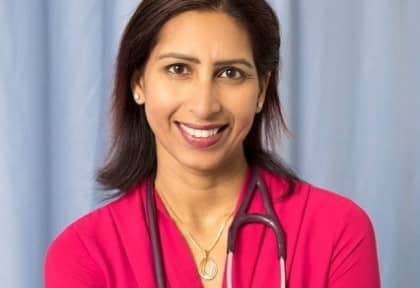 Dr Ranjana Srivastava OAM: Why compassion, humility and integrity are essential for doctors

As an oncologist and a medical writer, Ranjana Srivastava claims it was her experiences as a patient that influenced how her career ultimately shaped out. Her doctor’s demeanour as he delivered bad news – his “unflinching truth” and his tears – sparked a lasting professional passion for doctor-patient communication.
Today the Melbourne-based doctor has won acclaim not only for her work in the field, but also for her turn in the media as print columnist, radio presenter, television host and expert commentator, and of course as author of four well-received books.
Her OAM honour this year tops an ever-growing list of awards that includes academic honours, prizes in literature, ‘women of influence’ mentions and distinguished uni alumni awards.
“I’m very humbled, and a little thrilled,” she tells Indian Link.
It is clear from Dr Srivastava’s work that being a good doctor, is all about the patient. “I want to demystify medicine to the general public. That’s what good medicine is about – having a hand in one’s own health.”
The “asymmetry in medicine between doctor and patient” is a source of concern for Dr Srivastava.
“Taking the patient’s perspective increases their own understanding of the situation. There is better compliance, and better participation in their own health care. It also aids them in leading a good life, and also having a good death. It’s important to define their role in the process, because ultimately health is a shared responsibility.”
Her commitment to dealing directly with disparities in health care has also motivated Dr Srivastava to take up a variety of other roles, such as helping those that need immediate help. She has volunteered at natural disaster zones, and works with the Asylum Seekers Centre.
Mentoring younger doctors is another aspect along the same lines.

“Migrant doctors especially have a tough time,” she observes. “Those of us who know the ropes must support them in whatever way possible. We all help create a good doctor, and all of society benefits. I’m drawn to the experiences of migrant doctors because I identify with them.”

Dr Srivastava has spoken often about the role good mentors have played in her own life as a student and as a medical practitioner.
As well, she is not averse to speaking up about racism – and sexism – in the medical fraternity.
“All of this ties in with my passion for medical ethics, really,” she concludes. “That is why there is something very special about being a migrant and being recognised (on Australia Day), in terms of what we can give back to this country.”
Her writing, with straightforward but captivating titles (Dying for a Chat: The Communication Breakdown Between Doctors and Patients; Tell Me the Truth: Conversations with my Patients About Life and Death; So It’s Cancer, Now What? and After Cancer: A Guide to Living Well) may have given her a fan following outside the hospital scenario and in writers’ festivals across the nation, but it is medicine that is her first love.

“Medicine is the fulfilling career; all else is icing on the cake,” she reveals. “I always dreamt of becoming a doctor, even though I’ve been writing since I was five or six.”

Dr Srivastava was born in Canberra but grew up in India, UK and the US as she travelled with her academic parents. At 17, she returned to Australia to study medicine at Monash University.
“I’m grateful to my parents who took me round the world, taught me resilience and to cope with change by role modelling it for me,” she recounts. “They also taught me to keep in touch with my roots. My work has increasingly begun to take me back to India. I was there only recently: as a visiting scholar at the University of Chicago, I was speaking at their Delhi centre about medical ethics. I think it is important to pay tribute to where you come from and to your heritage. For instance, I’m married to an Australian but my kids speak Hindi. Best of both worlds, I’d say.”
What advice would she have for young doctors starting out?
“Firstly, always remember that it is an incredible privilege to do medicine. For every person that gets in, there are 100-150 aspirants who have missed out. Second, don’t underestimate the power of compassion and integrity. It’s what patients most remember most about their doctor. For a good doctor, humility, compassion and integrity never go out of fashion.”