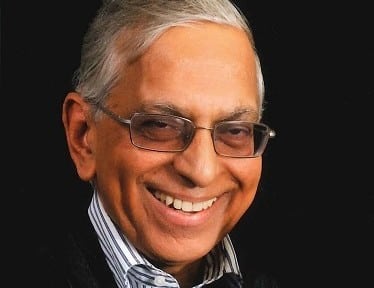 How did Dr Sawrikar feel when he heard the news that he had won an Australia Day honour?
“Honoured, but mostly surprised… and also motivated to take on some more projects!”
Purushottam Sawrikar, general practitioner, has been a social work enthusiast ever since he arrived here in 1972 from Hyderabad in India.
“I love interacting with people. Social work is something that has been a part of my life since I was a school kid. It continued through my university days and as a young adult.” There was much opportunity in India for this to find outlet. As a doctor, preventive medicine became one of Dr Sawrikar’s passions and he took the message of improving quality of life to the people through the media.
On radio, print, TV and through audio CDs, Dr Sawrikar reached out to the Indian community in Sydney on health-related issues.
On his Marathi radio show on 98.5 FM Akashvani Sydney, on the Kannada language Chandana TV and on Channel 31, he produced and directed shows about participating in government-initiated health and screening programs such as those for bowel cancer, breast cancer and the Mother’s Day Walk in Parramatta. These shows helped create awareness amongst newly arrived migrants on a variety of topics. Some of his memorable shows have been about what to do when a heart attack occurs, our predisposition to diabetes, how to stave off depression, and age-related eye disorders.
Many of these programs were turned into resource materials for distribution at surgeries and at community functions.
At large-scale community events, Dr Sawrikar organised for free health clinics on BP and diabetes.

As executive member and president of the Australian Indian Medical Graduates Association AIMGA, Dr Sawrikar advocated on behalf of India-trained doctors who found it hard to qualify for registration.

“We liaised with ministers and helped organise clinical attachments at a time when the draconian registration process was causing some distress.”
He was also instrumental in organising overseas conferences and seminars for AIMGA, especially a particularly successful one with the Global Association of Physicians of Indian Origin (GAPIO) in 2014.
Another project, creating a directory of Indian doctors in Australia, also met with much success: two editions were created, in 2003 and in 2013.
What does the future hold for Dr Sawrikar?
“I’m 71 now, and lately the issue of aged care has begun to interest me. I’d like to explore further the government initiatives that are in place such as MyAgedCare and help popluarise them in our community. As well, I would like to aid the creation of volunteer teams within the community that can take on some of the burden of caring for our seniors.”
Given he is still working 12-hour days most days, wonder when this new project will take off.