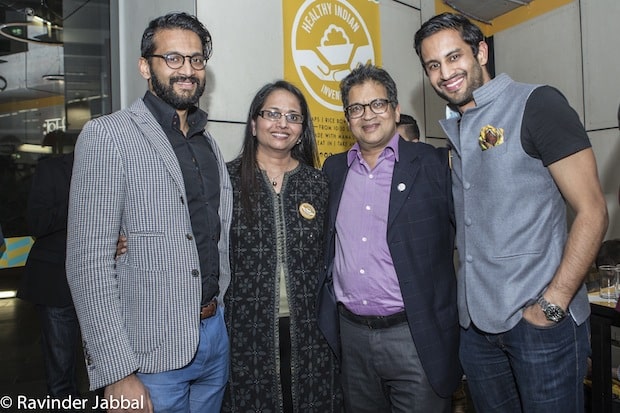 Despite the vast diversity of Indian food, an experience dining out for Indian in Australia is typified by chicken tikka masala and curries that tend to be overly rich or spicy. So when an Indian restaurant claims that it will provide nouvelle cuisine using seasonal ingredients with a focus on natural flavours and light textures together with a simple visual aesthetic, you sit up and take notice.

Everything about the recently launched Indian restaurant Tadka Boom, including its name, suggests breaking away from the norm. Located at Goldsbrough Lane in Melbourne’s CBD, Tadka Boom touts itself as Melbourne’s first Indian fusion kitchen that offers healthy Indian. To quote them, “We couldn’t find healthy Indian anywhere, so we decided to invent it”.

At Tadka Boom don’t expect buttery naans and creamy korma, instead look for Indian flavours with salads, wraps, brown rice, homemade chutneys and food made with a mom’s love. Mom being Lalitha Rajan who gave up a successful corporate career to launch the restaurant with her son Ashwin Rajan in order to share her love for healthy food with Melbourne.

Lalitha’s passion for food was visible at the recently held official launch of Tadka Boom as she spoke enthusiastically about her new venture.

“For me it’s all about food, feeding people and sharing my knowledge of food. There is a lot more to Indian food than just Nan, Butter Chicken and Roganjosh. We have a huge variety of food in India that can be fresh, light and healthy. At Tadka Boom you will get home-style food made with fresh quality ingredients, traditional Indian spices and recipes, cooked and served with lots of love,” Lalitha said.

She also introduced guests to new Kingfisher wines sourced from South Africa but now available in Australia through local distributers.

Ashwin Rajan, restaurant co-founder and head of sales and marketing, is a former solicitor and investment banker who intends to raise capital through underwriting healthy Indian cuisine.

“With Tadka Boomwe wish to transform some perceptions around Indian food in Melbourne. Scribbled on our walls is the Sanskrit saying Atithi Devo Bhava, loosely translated means Guest is God, which is the underlying philosophy and part of all that we are about at Tadka Boom. Mom and I are very excited about this journey and we hope our journey lasts a very long time,” said Ashwin during the official launch.

The place is designed mainly for food on the go, but for those that are not rushing and those who prefer a leisurely meal, it may be interesting to learn the story behind each dish that is influenced and enriched by Rajan family history.

There are many reasons to be charmed by Tadka Boom with its promise of traditional Indian with a western twist. As it shapes up to be an exciting addition to Melbourne’s culinary landscape, let’s hope the fun and freshness continues to boom.