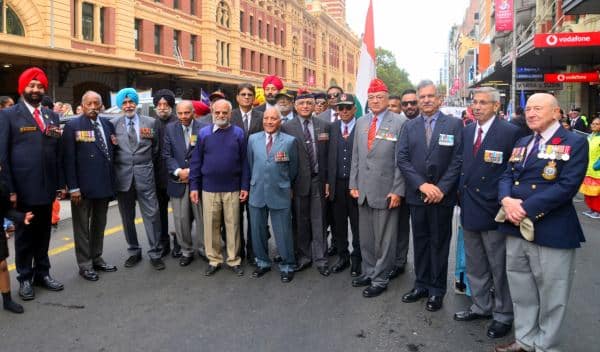 Reading Time: 3 minutesThe atmosphere is electrifying. You can feel the pride and energy in the air – in young families and tourists included. People of all age groups are gathered at the sides. They are here to pay respect to martyrs and to show their solidarity to kith and kin. This is the iconic Anzac Day parade.

The parade starts from the corner of Swanston Stand Flinders St down to St Kilda Road, to the Shrine of Remembrance. All along the parade there are members of the public who are cheering and clapping as the veterans march along.
This year Indian armed forces veterans participated in the parade for the eighth year. Next of kin of veterans also marched along with armed forces veterans of all countries.

The Indian contingent is made up of more than 35 veterans from various units of the Indian armed forces, commanded by Maj Gen Ranjit Nadkarni VSM. Speaking to Indian Link Radio, Maj Gen Nadkarni explains to the listeners the importance of ANZAC in the Indian context and the details about the supreme sacrifice by the soldiers from India at the ill-fated military campaign in 1915.
25 April marks the anniversary of the first major military action by Australian and New Zealand forces during World War I. They fought as a part of the British Commonwealth in Gallipoli against the Turkish forces.

The first Anzac Day parade was held on 25 April 1916. Today, a dawn service ceremony marks the start of the day in all major cities around Australia. The timing of the dawn service is based on the time that the ANZAC forces began landing on the Gallipoli peninsula.
Indian troops also participated in the war as a part of the Commonwealth forces, as India was a British colony at that time. Hence, this remembrance is equally significant to India’s military history. Around 15000 Indian troops fought in the war, most of them Sikhs and Gurkhas. The Indian contingent at Gallipoli comprised the 7th Indian Mountain Artillery Brigade, 29th Indian Infantry Brigade, Indian Supply and Transport Corps, and the 108th Indian Field Ambulance, among others. They served there from late April 1915 until the final evacuation in December. Most of them were good friends with Aussie troops. They faced a lot of casualties as they suffered heavy firing. It is said around 1500 people died and 3500 were wounded. Unfortunately, today they are forgotten soldiers.

Col. Samir Roychowdhury, Convener, Indian veterans, stresses that more Indians settled in Melbourne should come down to mark solidarity with the Armed forces. “It is our duty to acknowledge the sacrifices of Armed forces personnel and their families,” he says.
After the completion of the Anzac Day parade, the participants attend a lunch that has traditionally been hosted for them by the Indian Consulate, in their own tribute to the Indian armed forces veterans.