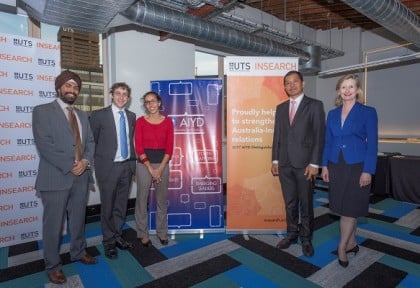 Alumni and sponsors of the Australia India Youth Dialogue event gathered in Sydney on 15 November to show their support for ongoing collaboration between emerging young leaders in Australia and India.

An annual dialogue between Australia and India, the AIYD aims to provide a sustainable platform for young leaders from Australia and India to collaborate and build enduring partnerships between the two countries.
Entering its sixth year, the AIYD now connects an impressive alumni group of 150 people, representing many accomplished and emerging young leaders from the two countries.
Some of the remarkable alumni of the AIYD include a co-founder of one of India’s most highly regarded social enterprises, a senior advisor to the Australian government, the youngest recipient of an international literary prize, one of Australia’s most successful female cricketers, elected representatives of the Australian and Indian parliaments, and Indian Olympic athletes.

“We are thrilled with the success of the AIYD over the past five years, the opportunities it brings participants and the deep connections it fosters between Australia and India,” said Shaun Star, Chair, Australia India Youth Dialogue.
“Each year the AIYD connects young future leaders from Australia and India – professionals, members of parliament, journalists, policy-makers, social entrepreneurs, representatives from non-government organisations and athletes to discuss opportunities and challenges significant to the Australia-India relationship.”
“The platform enables a rich exchange of ideas between our emerging leaders, encouraging participants to think creatively about how the Australia-India relationship may be strengthened through their collaboration and ongoing efforts,” said Mr Star.

Thirty young delegates will be announced in the coming month to attend the 2017 Australia India Youth Dialogue (AIYD) which will take place from 15-18 February 2017 in Sydney and Melbourne.
At the 2017 Dialogue, bright leaders aged between 18 and 40 will discuss innovation, healthy futures, and the value of investing in youth through education, skills and employment.
“AIYD’s strength comes from the range of participants, its alumni network, and the breadth of discussions and engagements,” said Belinda Howell, Chief Market Development Officer at UTS:INSEARCH, a Distinguished Partner of the AIYD.
“Alumni collaboration continues well beyond the Dialogue to strengthen the Australia-India bilateral relationship across various arenas,” said Ms Howell.

AIYD is an initiative aimed at developing new avenues for collaboration and partnership between India and Australia. With almost two-thirds of India’s population under the age of 30, India is one of Australia’s largest sources of permanent migrants and the second-largest source of international students.
“My compliments to AIYD for creating this great platform that allows a new generation of leaders to engage, to learn from each other and to script a brighter future for India-Australia relations,’ said His Excellency Navdeep Suri, outgoing Indian High Commissioner to Australia.

- Advertisement -
Share
WhatsApp
Facebook
Twitter
Linkedin
Previous articleLiving in the world's most liveable city
Next articleHow hard will it be for Australia to extradite and prosecute Neil Prakash?