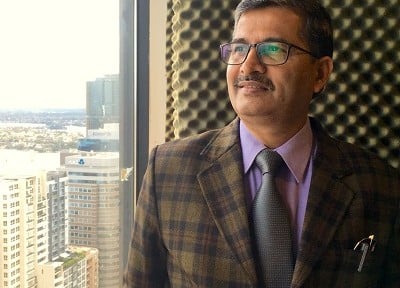 Ashwani Lohani, Chairman and Managing Director of Air India, on his recent visit to Australia confirmed his satisfaction with the local route between the two countries and his appreciation of the local staff. While Down Under, he caught up with Indian Link for an exclusive interview to tell us about his management philosophy and the future of air travel.
Mr Lohani, during my last visit to India, a few months ago, I was told the three toughest jobs in India are being the Prime Minister, being captain of the Indian cricket team and being the top gun at Air India. Now, is that true?
Before I took over this assignment, on the day I took over, I could not even comprehend that a job like this can exist. There is no doubt it is tough, but it’s also an enjoyable role.
It is a challenge, perhaps one of the biggest challenges in the corporate sector in India right now, and the challenge at times may seem impossible, but handling such challenges can be fun.


Can you share with us some of the day-to-day challenges you face?
Our organisation has been through a lot of turmoil in the recent past, in the last ten years. The merger of the two arms, the domestic arm, Indian Airlines, and the international arm, Air India, produced a challenge. They were organisations that were poles apart, with different cultures, the territories were different, the processes of doing things were different. And then they merged. Handling that merger has been a big challenge.
In your blog, Think, you have written about the challenges Air India faced in the wake of the merger in 2007. You wrote: “A merger that really never happened and, in the process, resulted in a chaotic situation is at the root of all ills that we are currently witness to.” What are the legacy issues which are worrying you?
The biggest legacy issue is a half-baked merger. It was a merger not taken through. When you merge two organisations, you merge posts, you merge cadres, you have to streamline salary structures, all that. But you are dealing with men, not inanimate objects. Everybody has aspirations and expectations. If you don’t handle these issues in a just manner and see issues through to their conclusion, you have problems on your hands.
We have definitely crossed the biggest hurdles. We are settling down, consolidating those issues. The staff are happy and we’re looking at expansion.
You are in the Limca Book of Records as the only person who has completed four engineering degrees in four years. You are an engineer, but moved into tourism and now aviation. How have you been successful in transferring your skill sets across these various disciplines?
I am basically a railways man and an engineer. Being an engineer gives you those analytical capabilities. You can utilise that capability whether you are handling a commercial aspect such as tourism, whether you are handling a museum, or running hotels or trains.
Also, in the railways, we handle large numbers of men. In my last posting in the railways, I had 50,000 people reporting to me. That is a big number! At Air India I have only 25,000 reporting to me. We go through the grind of handling large numbers of people and I think it helps.

On your office table is a picture of Virgin Group founder Richard Branson with a quote that says, “Clients do not come first. Employees come first. If you take care of your employees, they will take care of the clients.” Tell us about this sentiment.
I believe in that philosophy. I am handling an airline showing signs of a turnaround, but I don’t consider myself a specialist in the field. It’s a matter of applying common sense and harnessing the power of men.
Being from the railways, they are the biggest corporation in India, employing 1.5 million men; almost 15,000 trains run every day, come what may, they leave the station – whatever happens. The organisational culture is centred around delivery of service. Delivery is what we want in all organisations. That gives you strength in doing things. I’ll always be proud of that and look up to that, to harness my own energy and power and focus on people and delivery.
Since taking over your post, Air India is reporting its first operating profit. How did that come about?
We had no option, no choice, but to turnaround. It was a matter of thinking ‘If I try to turn around I may fail, but if I decide to turnaround we jolly well have to turnaround!’ The falling oil prices helped. We also consolidated and adopted a new philosophy – ‘Fill more, fly more.’ We have kept the same aircraft but we’re flying more flights. We started the Delhi to San Francisco flight, in the first week I approved that. It’s going well, they’re packed flights. Then we started Delhi to Vienna, recently in August we started the Ahmedabad-London-Newark flight, and from 1 December we’ll be launching our Delhi to Madrid service.
Tell us how Air India is going to extend its market in Australia
We recently finalised that we’re going to be flying more to Australia! We’re going to increase the number of flights. Currently it’s 7 flights a week, we’re going to increase to 5 plus 5, 10 flights a week in the next summer schedule, by June 2017. We’re also the only airline to fly directly to India, and we’re best value for money.

This is part of ‘Fill more, fly more’. Fill more means we have an occupancy of 77% but we can take it up to 90%. It is a simple strategy. The market is growing and the tourism scenario is rapidly changing. The number of people going in and out of India is growing very fast. In 1999, there were only 2 million tourists coming into India, now we’ve got 8 or 9 million. On the back of that, there is a hidden desire in the hearts of many more people to visit India and we want to exploit that. I know this reality, if we’re able to provide more seats between India and the world, then people will fill them.
Australia’s QANTAS is 51% government owned and 49% public owned. Increasingly there is pressure for governments to disinvest from their national carrier. What are your thoughts on that?
I am pro public sector. I feel a public sector entity can perform as well as a private sector corporation provide we are given the support and authority to make decisions. Aviation is the ‘mother of all businesses’. It is the most complicated, much more so than running hotels or any other sector. The margins are very low and the scenario is extremely dynamic. Safety standards have to be maintained to the highest levels, whether you have money or not, you can’t compromise on safety. Regulation is extremely high and the international standards are extremely high. At times, being part of the public sector, you can feel the constraints because I can’t make decisions at the speed and level I would like to, but we can reach a particular level of success. I don’t think about disinvestment, only about running the airline well.
- Advertisement -
Share
WhatsApp
Facebook
Twitter
Linkedin
Previous articleMirth and music in Melbourne
Next articleWomen helping women