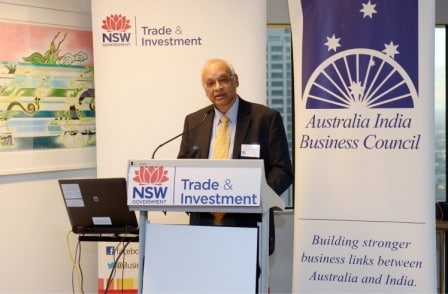 Experts predict that when the current Australian mining boom is over, the key to Australia’s economic growth will be its capacity to meet the basic food needs of over nine billion people worldwide. Asia’s middle class is expected to make up more than 2.3 billion of the world’s middle class by 2030, and the challenge globally will be to meet their food requirements.
Two of Asia’s most populous countries, India and China, have collaborated in an investment in the agricultural food processing sector in Australia. The Australia India Business Council (NSW) chapter hosted an evening, where the managing director of Riverina Oils & Bio Energy Pty Ltd (ROBE) could tell the story of this amazing venture, to their members and guests.
“What makes this venture extra special, said Sheba Nandkeolyar, President of AIBC NSW, “Is that Riverina Oils & Bio Energy is the first collaborative Indo-Chinese investment in Australia, in the food/Agri area in Australia. It is also the first Green Field Investment funded by Indian Banks namely State Bank of India and AXIS Bank in the Food Agri Sector” Sheba said.
The managing director of ROBE, Dhruv Saxena addressed the 70 plus leading business and political attendees, and spoke about his satisfaction. After five years of planning and construction, the ROBE business in the NSW Riverina is now home to one of the largest oilseed crushing and refining plants in the country. “The work which we have done is an example of how working with foreign investors can help overcome the need of capital for the Australian agricultural sector,” he proudly announced to the attendees.
Saxena estimates that while there will be 80 direct jobs at the plant in Bomen (near Wagga Wagga), over 500 indirect jobs will be created locally. With more than 500 pumps, 42 kilometres of cable and 36 kilometres of piping, it’s an important facility in the Riverina district. He expects an incremental requirement of over 100,000 tonnes of oilseed (planting of 75,000 hectares) in the Riverina region alone. This will provide farmers with an alternative cropping option, and the possibility to earn over $100 million in exports to Asia, and $150 million in import substitutes of protein meal, for animal feed in 5 years.
Saxena, himself a Melbourne based businessman, explained the reasons for the ROBE facility at Wagga Wagga. He stated that it was chosen for its proximity to a large canola growing district in southern and central NSW, and northern Victoria. Wagga Wagga also has good local skills and talents available. The investors also wanted the site to be close to direct freight routes to Melbourne and Sydney.
The ROBE initially started in 2009, with a capital cost of $64 million with three partners: Dhruv Saxena, a leading Indian businessman, Satya Agarwal, chairman of Bhoruka Group, and Ravi Uppal, who owns 60% of ROBE, and the US technology venture capital group, Lotus Ventures, holds the other 40%. However, the cost during construction phase blew out to about $100 million, and current share holders include SP Chemicals, China, Asia wide Holdings, Singapore, Lotus Ventures, New York, and Bhoruka Industries, India. In spite of the cost blowout, Saxena is confident that the investment will pay off in the long term.
With its current positioning to meet the growing needs in Asia, while using local Australian skills and resources, it is an innovative step for an Indian agri investment.