The goal was to promote community inclusiveness, while marking the Diwali theme of victory of light over darkness. 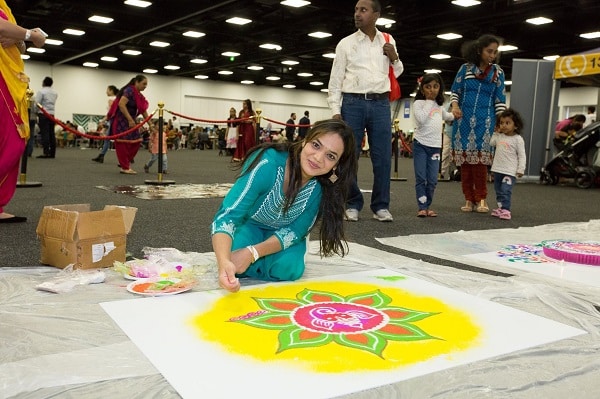 Great splashes of rangoli colour.  A blaze of saris and ghaghra cholis.
Folk music from Uttarakhand to Kerala. Gujarati Garba to Robindra Sangeet.

These are but a few highlights of Adelaide’s mega Diwali event, quite aptly called Biggest Multicultural Deepavali Carnival 2017. Organised by the Hindu Council of Australia’s South Australia chapter, it was held at one of the biggest venues in our city, Adelaide Showground.

Hindu Council of Australia is a peak body organisation founded in 1998 in Australia. Since HCA was founded, it has been acting as a representative of the community in Australia in dealing with the federal, state and local governments, apart from reaching out to other organisations and institutions.

Its annual Deepavali Carnival was launched in Adelaide in 2015 and has grown significantly since then. With volunteers forming its organising committee, the focus is single-minded: to preserve and cultivate the culture of Hinduism.

The goal at this event was to promote community inclusiveness, while marking the Diwali theme of victory of light over darkness, good over evil, knowledge over ignorance, and hope over despair.

Over 4000 people turned up. Six different ethnic groups came together to grace the day – from India, Nepal, Bhutan, Bangladesh, Fiji and Tibet. They presented beautiful cultural performances and food stalls as well.

The rangoli competitions, photo booth and exciting kids’ rides were huge favourites at the carnival. The back-to-back cultural performances were huge drawcards, and as expected, the food stalls drew the largest crowds.
The Carnival was attended by the Premier of South Australia Jay Weatherill, Minister of Multicultural Affairs Zoe Bettison, their parliamentary colleagues from both the Labor and Liberal parties, and representatives from the Local Councils. Corporate businesses also provided support.

The Indian Consul General Vanlalvawna came down especially from Sydney 9 and also organised a consular camp for the benefit of the community, to coincide with the event.
The performers, emcees, stall holders, the many community organisations especially the senior citizens’ group, all did their bit at this magical weekend, in a spirit of community togetherness.