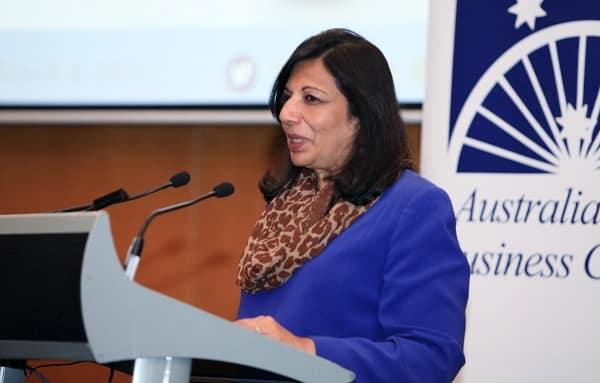 When your father is a brewer with United Breweries Group, India’s largest producer of beer with a market share of around 48 per cent, it is little wonder that he would encourage you as his daughter to become a brew master.
For Kiran Mazumdar-Shaw, her fate was sealed when after school she failed to get a scholarship to join a medical school in India. In 1974 her father packed her off to Federation University in Australia to study Malting and Brewing.
That she was the only woman enrolled in the brewing course, spurred her on to top her class.
Fast forward to 2015, she is the chairman and managing director of Biocon Limited, a biotechnology company based in Bangalore, and the current chairperson of IIM Bangalore.
As of 2014, she is listed as the 92nd most powerful woman in the world by Forbes and her personal net worth is estimated at US$655 million.
Kiran Mazumdar-Shaw was in Australia recently as her alma mater named a campus street in her honour. The Australia India Business Council (AIBC) organised a dinner with her at the prestigious Four Seasons Hotel in Sydney. Limited to just 40 guests, Mazumdar spoke about her journey in a talk aptly named “Confessions of an Accidental Entrepreneur”.
Mazumdar-Shaw recalled starting the business in her garage with less than Rs 10,000 capital.
“Australia had taught me self-confidence and even though banks in India and the business community found it difficult to accept a start-up by an Indian woman in 1978, I felt full confidence in my ability,” she told those gathered.
“Of course, my father had to act as guarantor for my first loan,” she laughed.
Now, for her company Biocon Ltd.to have a target market value of US$ 1 billion by 2018, one can safely assume the guarantee came good.

Kiran Mazumdar-Shaw had her listeners in thrall as she spoke about her baseline philosophy that the world needs “affordable innovation”.
Identifying an increasing need for affordable drugs in less-wealthy countries, she began to look for opportunities to develop cost-effective techniques and lower-cost alternatives.
Her ability to assess market potential for cholesterol fighting drugs was pivotal in 2001 when the patent of the cholesterol-lowering drug lovastatin expired and Biocon got involved in its development, alongside other forms of statins. She also ensured a high quality of research into ailments such as cancer, diabetes and other auto-immune diseases such as rheumatoid arthritis and psoriasis.
She spoke passionately about the desire of her company to reduce therapy costs in the treatment of these diseases.
Comparing Australia and India, she was clear that India has the potential to be the global innovator in biotechnology. “Agri biotech and bio fuels are great opportunities for India. Now, Australian biotech companies are innovative but need to scale up, and there can be great synergies in Australia-India partnerships,” she said.
But the challenge, Mazumdar-Shaw admitted, is that India and Australia are not natural partners. India looks west, and Australia looks west and towards China for partnerships.
“Perhaps AIBC needs to do more to bring our optics together,” she said.

There were many lessons that her listeners took away that evening. One was that entrepreneurs need to challenge themselves and find new heights.
“You cannot be emotional in business,” she declared with wisdom. “If there is no value add, you have to let the idea go. But you must create value through innovation, and so you need to leverage your skills to find greater value.”
Another lesson was that the corporate world has to make more room for women, especially in the board rooms which have for far too long been boys’ clubs. Despite the recent bad publicity regarding women in India, how many people know that by law a certain percentage of seats on corporate boards are reserved for women? Indeed, many of India’s leading banks, Mazumdar-Shaw reminded her audience, are led by women.
It was quite a coincidence that the Sydney reception for Mazumdar-Shaw was held so close to International Women’s Day, but it was no coincidence that most of the questions that evening came from women – young Indian-origin women with a head for business who are clearly passionate about going down the path that Mazumdar-Shaw has so successfully forged.