A tournament of yesterdays 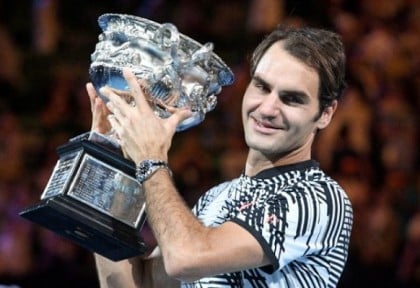 Highlights from the 2017 Australian Open

For several years now, grand slam tournaments have followed the same, familiar pattern. On the men’s side, the highest-ranked players generally find their way through to the finals, where a series of baseline slug-fests determines the ultimate champion. On the women’s side, there is more variance, but one looming constant – the tournament is always on Serena Williams racquet, and more often than not, she prevails. There are upsets, but at the pointy end of a major tournament, there always seems to be a familiar face holding the most coveted silverware in the world of tennis.


There were certainly two familiar faces lifting the trophies this year, but to leave it at that would be misleading and do a gross injustice to two weeks of high drama, raw emotion, scintillating tennis and, above all, comforting nostalgia.  So, in the spirit of throwbacks, we’ve picked some of our favourite moments from what many sports fans, journalists and tennis experts have declared was the best edition of the Australian Open yet.

The upset(s) of the tournament

When defending champion Novak Djokovic found himself down match point against Denis Istomin of Uzbekistan in the second round, you could be forgiven for placing a cheeky $10 wager on the Serbian to come through. After all, in consecutive US Open semi-finals at the beginning of this decade, Djokovic saved several match points against Roger Federer, arguably the greatest frontrunner in tennis history. However, you would have been $10 poorer moments later when the six-time champion was bundled out for his earliest defeat at a grand slam since Wimbledon 2008.


Just a few days later, the 29 year-old German Mischa Zverev, who has only qualified for two of the last 20 grand slams, toppled world number one Sir Andy Murray in four sets of breathtaking serve-and-volley tennis. There were whispers that the courts were faster, but the best players usually adjust and find a way through.
Not this time around. The draw was blown wide open, and previous champions were lurking.

A rematch for the ages

The Federer-Nadal rivalry does not have as many chapters as Djokovic-Nadal, Djokovic-Federer or Djokovic-Murray. It is an almost ironic label; the rivalry is heavily skewed in favour of the Spaniard, who has won 23 of their 35 meetings.  But it is by some distance the most romantic, storied and anticipated rivalries of all, and the fact that they managed to find their way to their 9th major final – almost a decade since the last edition – is one of the more poignant moments in the history of tennis.

Prior to this tournament, Federer had not won a major since 2012, and had not played a match in 6 months, having had surgery to recover from a knee injury sustained in the most innocuous of circumstances – drawing a bath for his twin girls. Nadal, on the other hand, had not won a major since 2014, and had also endured a number of injury-plagued seasons since then.
The odds were stacked against the pair from the start – their low seedings offered them little protection against the top-8 players, the hard courts and sticky conditions almost demanded fitness and youth, and their lack of form presented an almost visible mortality to opponents.
But, after the pair survived their fair share of scares to reach the final round, it may as well have been 2008 again: Andy Murray was a non-entity; the world economy was in turmoil and uncertainty; the Williams sisters had just faced off in the women’s final; Nadal attacked the Federer backhand; Federer produced moments of magic only he is capable of; and each pushed the other’s level higher until a final set crescendo of brilliance, agony and theatre, and, when the die was cast and Federer stood alone, uncontrolled emotion.


Researchers will soon be looking into the theory that five-set Federer-Nadal finals are one of the leading causes of heart palpitations across all age groups.

The success of the Williams sisters is manifestly underappreciated, and perhaps it will take a retirement to force our hands and hearts. The pair were born a year apart, have met in 9 grand slam finals, share 30 major singles titles between them, and, when playing together, have won 14 major doubles titles. Leading into this tournament, however, their last meeting in a grand slam final was in 2009. While Serena has enjoyed continued success at the top of the women’s game since then, Venus had failed to reach another grand slam final, having been diagnosed with an autoimmune disease in 2011.


It was apt, then, that the pair should meet in a decider again in Australia, in a tournament in which Venus has only once made the final – where she lost against her sister, 14 years ago. Serena’s 23rd major title places her within touching distance of Australian great Margaret Court (24). It’s entirely possible that Court’s record will be bested by the end of the year.
Although Venus was not able to reverse the 2003 result, she remarked in a quote that may come to define the closeness of the sisters’ bond and their individual and shared success – “I really enjoy seeing the name ‘Williams’ on the trophy. This is a beautiful thing.”

Cue emotion. You can only hope that they fight for the TV remote.

Indian glory at major tournaments has, for some time, been confined to doubles, resting on the shoulders of Leander Paes and Sania Mirza. There was to be no silverware for Indian players this time around – while Paes and Hingis lost in their mixed doubles quarter-final; Sania Mirza and Ivan Dodig fell at the final hurdle, losing the final in straight sets.


There was, however, recognition for someone not accustomed to the limelight. Abhishek Mukherjee, the only international tennis umpire from Bengal, was recognised by the organising committee of the Australian Open for his 10 consecutive years of service at the Open.
Mukherjee, who began his tennis career as an athlete, eventually became an umpire, officiating in 32 major tournaments. He is now in charge of the Hawkeye department, and hopes to move on to becoming a grand slam supervisor.

“I will never ever forget this day. This has truly made my life, and everything bad that’s happened, it has made it okay. Just the fact that I was this strong, it made fighting this hard all worth it.”
Mirjana Lucic-Baroni of Croatia, after making the semi finals of a grand slam for the first time in 18 years, having overcome extreme challenges including domestic violence, injury and financial difficulty in that time.