A surgical strike on black money 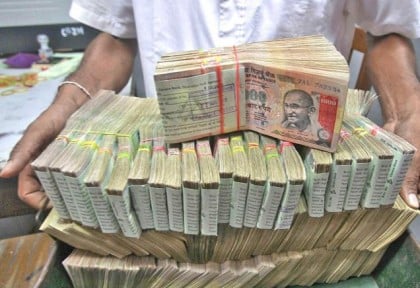 There was a panic run on ATMs across India as Prime Minister Narendra Modi surprised the nation by declaring that Rs 500 and Rs 1,000 notes would no longer be legal tender from midnight Tuesday 8 November, in a new war on black money and terrorism.

Addressing the nation at 8pm, PM Modi urged people not to panic and said all the Rs 500 and Rs 1,000 denomination notes they have can be deposited in banks and post offices from 10 November to 30 December without any limit.
These can also be exchanged across bank counters by showing government-issued ID proof up to Rs 4,000. New Rs 500 and Rs 2,000 denomination notes would take their place
“To break the grip of corruption and black money, we have decided that the 500 and 1,000 rupee currency notes presently in use will no longer be legal tender from midnight tonight,” Modi said, speaking first in Hindi and then in English.
“This means that these notes will not be acceptable for transactions from midnight onwards. The 500 and 1,000 notes hoarded by anti-national and anti-social elements will become just worthless pieces of paper.”

But he quickly added that “the rights and the interests of honest, hard-working people will be fully protected” and that all other denomination notes and coins would remain legal tender.
All banks will be shut for public on Wednesday 9 November. ATMs too will not function on Wednesday and in some areas even on Thursday.
The opposition roundly denounced the move.
Congress leader Manish Tewari called Modi “a modern day Tughlaq” while party colleague Randeep Surjewala questioned the wisdom of introducing Rs 2,000 currency notes. The Aam Aadmi Party said it would react later.
West Bengal Chief Minister Mamata Banerjee called it “draconian” and demanded its withdrawal. The CPI-M warned it would have a major affect on the economy.
BJP President Amit Shah, however, praised Modi, calling the announcement “a surgical strike on black money”.
FICCI President Harshvardhan Neotia said: “This is an extremely bold move … and will have a debilitating impact on the parallel economy as well as deal a body blow to terror financing.”
CII President Naushad Forbes hailed Modi and said the step would hit hard the “black cash economy”.
Within minutes of Modi’s announcement, hundreds of thousands of people all over India rushed to the nearest ATMs in a desperate bid to withdraw 100 rupees notes and deposit whatever 500 and 1,000 rupees notes they had. In no time, most ATMs ran out of 100 rupee currency.
Modi said: “India has taken a historic step to fight corruption, black money, terrorism and counterfeit currency.”
He said keeping in mind the supply of new notes, in the first few days there would be a limit of 10,000 rupees per day and 20,000 rupees per week for withdrawal from banks. This limit would go up in the coming days.
The Prime Minister said that for their immediate needs, people can go to any bank and post offices, show identity proof and exchange old 500 and 1,000 rupee notes for new notes.
From November 10 to 24, the limit for such exchange would be Rs 4,000. The limit will go up from November 25 till December 30.
Those failing to meet the December 30 deadline can go to specified offices of the Reserve Bank of India up to March 31, 2017 and deposit the notes after submitting a declaration form.
When the ATMs resume operation, there will be a limit of Rs 2,000 per day per card on withdrawal, the Prime Minister said. This would be raised to Rs 4,000 later.

To reduce hardship to people, government hospitals would accept both 500 and 1,000 rupee notes for 72 hours. So will pharmacies in government hospitals as well as railway ticket booking counters, ticket counters of government buses and airline ticket counters at airports.
This will also apply to petrol, diesel and CNG gas stations authorised by public sector oil companies, consumer co-operative stores authorised by state or central governments, milk booths authorised by state governments and cremation as well as burial grounds.
Foreign tourists and travellers would be allowed to exchange the banned notes up to a value of Rs 5,000 at international airports.
RBI Deputy Governor R. Gandhi said there were 16.5 billion units of Rs 500 notes in circulation while the number for Rs 1,000 notes was 6.7 billion.
In his speech, Modi said the spectre of corruption and black money had grown over the decades, weakening efforts to remove poverty. “The evil of corruption has been spread by certain sections of society” who he said had ignored the poor and cornered all the benefits.
“There comes a time in the history of a country’s development when a need is felt for a strong and decisive step.
“For years, this country has felt that corruption, black money and terrorism are festering sores, holding us back in the race towards development.”
Saying the magnitude of cash in circulation was directly linked to the level of corruption, Modi said this also strengthens the hawala trade, “which is directly connected to black money and illegal trade in weapons”.
This step “will strengthen the hands of the common man in the fight against corruption, black money and fake currency”, the Prime Minister said.
There was no restriction of any kind on non-cash payments by cheques, demand drafts, debit or credit cards and electronic fund transfer during this period, he added.
PM Modi admitted these measures may cause “temporary hardships to honest citizens” but said “ordinary citizens are always ready to make sacrifices and face difficulties for the benefit of the nation”.
He hoped that all political parties, all governments, social services organizations, the media and indeed all sections of the society would help make the new currency system a success.
IANS