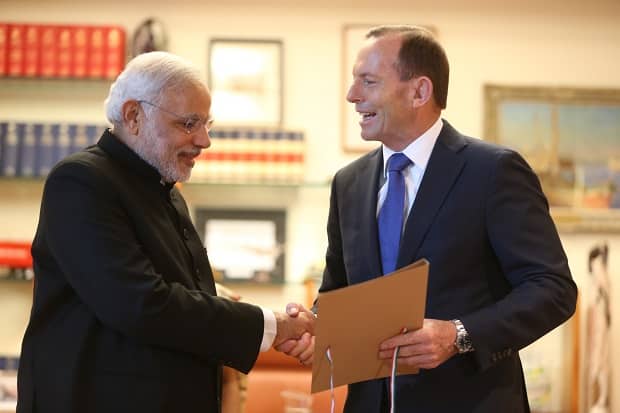 India and Australia marked a new synergy in bilateral relations as they agreed on a framework for security cooperation to boost defence, civil nuclear and economic ties even as PM Narendra Modi ended his hectic five-day, four-city visit of Australia.

The two countries signed five agreements, including one on exchange of sentenced prisoners, while Modi also addressed the Australian parliament, the first Indian prime minister to do so.

After talks with Prime Minister Abbott in Canberra, both countries agreed to seek early closure on their civil nuclear agreement and to speed up negotiations on a bilateral trade pact.

India and Australia also agreed on a framework for security cooperation to reaffirm the bilateral strategic partnership.

Both sides will cooperate to counter-terrorism. Australia will support Indian membership of the export control regimes.

Modi said the two countries had agreed to speed up negotiations on a Comprehensive Economic Partnership Agreement. He sought easier access for Indian business to the Australian market and quicker investment approvals.

Modi said both sides need to strengthen their security cooperation to combat terrorism and cooperate closely in international forays like the East Asia Summit, the G20 and the Indian Ocean association.

Abbott said after the bilateral talks that Australia “will export uranium to India under suitable safeguards, of course”.

In a take-off on their close sporting links, Abbott referred to the BJP government’s strong majority in parliament, “Modi has the runs on the board for getting the bureaucracy working (to get any job done).”

In Melbourne, Modi addressed business honchos, including mining magnate Gina Rinehart, saying that his government was undertaking reforms to enhance the ease of doing business in India.

A joint statement said that the existing Joint Working Group on Counter-Terrorism would be renamed to cover other transnational crimes, including ongoing cooperation on illegal migration.

Both prime ministers directed that an equitable, balanced, mutually beneficial and high quality Comprehensive Economic Cooperation Agreement be brought to an early conclusion.

It said the Framework for Security Cooperation showed “the unshakeable resolve of the two countries in combating and defeating terrorism, including threats posed by foreign fighters joining extremist groups”.

The Australian government will also relax visa restrictions for skilled migrants, in an effort to make the country more competitive.

A temporary work visa, the 457 visa allows skilled workers to come to Australia and work for an approved business for up to four years.

“The 457 program must be a means of filling genuine skills gaps in the local labour market while not placing unnecessary administrative burdens on business,” the statement said.

In a separate development, the government will introduce a new Premium Investor Visa (PIV), which offers a faster 12-month pathway to Permanent Australian residency than the existing Significant Investor Visa.