A memorial for fallen soldiers 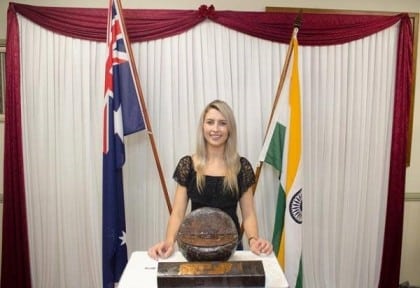 The design is unveiled for the Australians of Indian Heritage War Memorial. Dr NAIDU BODAPATI  reports

In Australia, very little is known about the millions of service men and women of Indian heritage, of pre-independence and undivided India, who fought alongside the British in World Wars I and II.


In WWI, 1.3 million Indian soldiers fought and 74,000 lost their lives, including 15,000 soldiers who fought at Gallipoli among whom 1,500 lost their lives. In WWII, 2.5 million Indian servicemen and women fought alongside the British and 87,000 lost their lives. Soldiers of Indian heritage also represented Australia (in addition to those who represented Britain) in the Wars, and their contribution also went largely unknown.
“Indian soldiers were the largest single contingent of all Britain’s colonies and dominions, yet their contribution hasn’t been duly recognised,” said Surendra Prasad OAM, Chairman of the Australians of Indian Heritage War Memorial (AIHWM) Committee.

The Indian diaspora in Brisbane and the AIHWM Committee is poised to change this situation by establishing a monument in the Memorial Garden of Sunnybank RSL Sub-branch.
“The soldiers of Indian heritage are not forgotten any more in Queensland,” said Mr Prasad.
The AIHWM Committee held a competition for first year Architecture students of Griffith University, Queensland to suggest a design for the monument.  A group of 88 students participated in the competition and 11 were selected as finalists to develop their designs further. A panel comprising Prof. Sarva-Daman Singh, Lewis Lee OAM, Captain Chetan Chandegave, Harry Claassen, Prof. Gordon Holden, and Dr Ruwan Fernando judged the entries in early November.
A gala dinner was arranged at Sunnybank RSL Sub-branch to announce the winners. The program started with a Last Post service conducted by Harry Claassen, Vice President Sunnybank RSL Sub-branch, and Paramjit (Peter) Sarai was the Master of Ceremonies.

“This proposed project will be the first step towards creating a collective public memory and also this will also be the first in Queensland 100 years after WWI,” said Surendra Prasad.
In his speech, Graham Perrett MP, Federal member for Moreton said, “The soldiers of Indian Heritage who represented Australia in the wars were not even Australian citizens. This shows their commitment to Australia, which should be recognised.”
Lewis Lee OAM, the Chair of the judging panel, introduced all 11 finalists: Bianca Archer, Diana Mandiola, Cian Duggan, Caedric Reader, Jomar Bohme, Brian Mates, Graham Brenton, Andrew Kwok, Alecia Chang, Bradley Shakespeare, and Brigitte Aiello. All the final 11 designs were displayed at the venue for attendees to view.
Mr Lee announced the judges came to a unanimous decision in selecting the design proposed by Bianca Archer. A full version of this winning design will be erected in the memorial garden at Sunnybank RSL Sub-branch on or before 11 November (Remembrance Day) 2017. The second prize was presented to Diana Mandiola, and third place was shared by Cian Duggan and Caedric Reader.

“During the design of this monument, I became emotional and personally angry that Indian soldiers fought and suffered for Australia, which was not their country at all,” said Bianca Archer in her first prize acceptance speech.
The committee had previously collected $15,000 at a fundraising dinner in May and obtained a financial commitment of $30,000 from the federal government for the project.
In memory of the soldiers, the committee also set up a bursary for students of the Indian diaspora. Symbol Sidhu of St Thomas More College, Sunnybank was the first recipient of $1,000 in October.