Your own piece of Bollywood 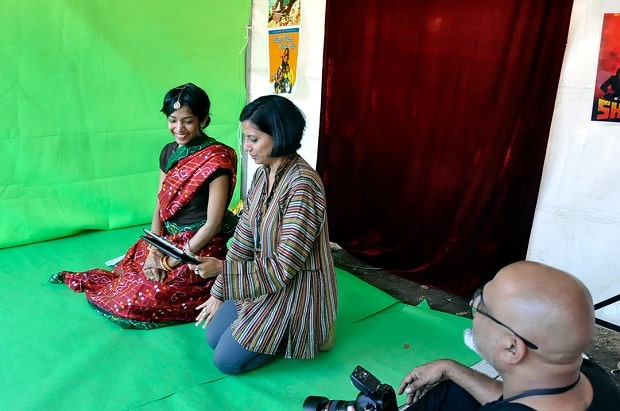 An interactive art installation gives everyone a chance to be a star with Bollywood’s brightest, writes PRIYANKA TATER

Be it inspiration or aspiration, Bollywood somehow manages to sneak into our everyday lives and influence us in some way or the other. For us in the Indian community, let’s face it, love it or hate it, you can’t ignore Bollywood!

So when given a chance at Parramasala for a shot at Bollywood immortality, the fans queued up.

They lined up to have their photos clicked to replace their favourite superstars on posters of Bollywood films.

And we are not talking about a mere cut out of a film poster where you could pop your face in the hole created by cutting out the face of the actor. It was some serious photo shoot going on with an artist to dress you up Bollywood-style, and a photographer to freeze those moments forever with a click. No simple ‘cut, copy and paste’, this!

Canada-based Pakistani artists Tazeen Qayyum and Faisal Anwar brought to Sydney a ‘dash of Bollywood with a difference’ this year.  No, they didn’t bring an SRK or a Katrina along with them, instead they helped bring out the superstar from within Sydneysiders through their interactive art installation they like to call Bring Your Own Bollywood (BYOB).

And what can be a better choice of subject than the larger than life imagery of Bollywood itself.

“Bollywood transcends boundaries and people relate to it,” adds Abdullah M.I. Syed, resident artist at Parramatta Artists Studio (PAS), who is also the man responsible for making this event possible.

And he’s right, because the people lined up were not all Indians!

Just in case you were one of those who got themselves already immortalised in a poster, visit http://byobollywood.com or BYOB community Facebook via BYOB webpage. All posters will be ready from November 4 onwards for download and print.

Of course, you could argue that Photoshop could probably do the same job, but the question is, how many of us really end up taking the initiative and doing it.  Now, don’t be a spoilsport and think about this – enacting a Bollywood fantasy at a live event, with the festive mood in full swing outside, has to have something going for it, don’t you think?

Hmm, well, as long as you don’t get carried away…