Women should dress a certain way… 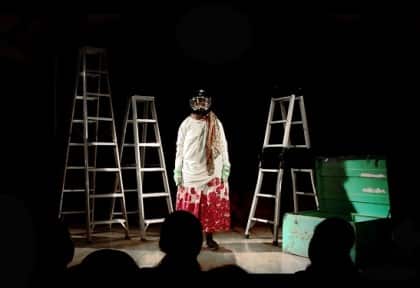 The stage is lit, with two lights focused on two clothes stands on stage. A variety of dupattas – green, pink, ochre yellow – hang from the stands. There’s a dozen coloured singlets folded neatly. A pink sequined dupatta catching the light every now and then. Two pairs of sneakers arranged neatly on the floor. Strangely, a black motorbike helmet peeks out from behind one of the benches.
This is Delhi-based actor Mallika Taneja’s one-woman show, Thoda Dhyan Se (Be Careful).
The lights dim. A hush descends on the chattering audience. It’s a small venue, and we sense the performer walking from the wings. The lights come on, and Mallika Taneja is on stage.

She’s stark naked.
I don’t know where to look, terrified that I will objectify her.
I look straight at her face, trying to ignore her nakedness, but Taneja knows this, and stays still, forcing us to confront her nudity.
There’s a nervous tension in the room, I know others are feeling as delicate as I am.
I finally take her nakedness in, and after the initial shock of a brown naked body in front of me wears off, I am struck by the banality of the human body. Roughly, we’re more or less the same, I think. Why are we so obsessed with nudity?
After what feels like an eternity, there’s movement. Taneja looks around, first plainly, then with expressions that vary from smiling to jeering. Then turns sideways and appraises herself in an invisible mirror. She adjusts her hair. A loud giggle erupts from her, and the noise cuts through the tension in the audience and diffuses our collective anxiety. I take a deep breath, unaware I was even holding my breath.
“You HAVE to be a little careful”, she says. “Times are bad. EVERY time my Dad says goodbye, he always says, ‘be careful’.”
She reaches her right hand out, takes a dupatta and ties it above her breasts with great vigour, knotting it on the side.
“It’s not that difficult, you know”, she continues. “I just have to follow the rules.”
She takes another dupatta and ties it around her breasts. “If you don’t give them the opportunity to say something, then it’s good, na?”
Another dupatta goes around her waist, the next around one thigh. Then she starts putting on the singlets, one over the other. In an animated voice, she tells us about her friend Neha, and how she broke the ‘rules’.
“Arrey Neha na,” she says, in her endearing and typically lilting Indian accent, “she came yesterday by bus.” Describing the bus route, she grows animated.  “From Munirka it goes to Kapashera. From Kapashera it goes to RK Puram.” She gets louder. “From RK Puram it goes to Moti Bagh, from Moti Bagh to  Badarpur, from Badarpur to Nizamuddin, from Nizauddin to Salarpur, from Salarpur to… SHORTS???!!!!!”, she shrieks. Silence follows. Softly, pleadingly, she says, “If you open a jar of pickles and keep it in front of someone… they’re going to want to put their fingers in and have a little taste, na?”
Taneja’s performance is brilliant. In a 20-minute monologue, she satirises the ridiculous victim blaming advice that women in India and over the world get about how to behave to avoid harassment, assault, rape. She plays the part of someone who wholesale consumes the advice, and as she does this she cleverly exposes the one sexist, misogynist nature of this advice. As she performs, she clothes herself with nearly 10 dupattas, a dozen singlets, a few of pairs of shorts and pants and socks on both her feet and hands. Finally, still talking, she wears a pair of sunglasses and tops it off with a black motorbike helmet. She’s unrecognizable.
That, indeed, is the point of her performance.
We blame women for sexist and criminal behavior, and demand that they change their behaviour to prevent it. Here’s Taneja’s advice: “If you don’t want someone to say something to you that you feel a little bad, if you don’t want someone to do something to you that you feel a little bad, or if you don’t want someone to even THINK something about you that you feel a little bad, then you keep yourself in a way where you don’t….FEEL anything at all.”
And that’s what Taneja’s final helmeted appearance signifies. That, by controlling women’s presence and expression, what society is actually asking women is that they, in effect, become invisible, and cease to be.