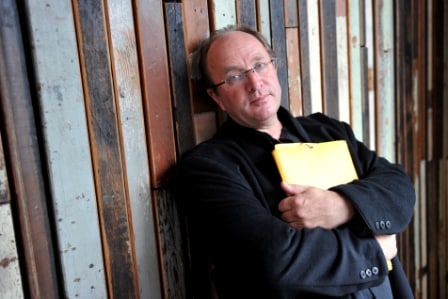 At the Sydney Writers’ Festival in May 2013, William Dalrymple, author of nine books about India and the Islamic world, including City of Djinns, Nine Lives: In Search of the Sacred in Modern India and White Mughals, spoke to a packed audience at the Sydney Theatre Company about his new book, The Return of a King: The Battle for Afghanistan.
Return of a King: The Battle for Afghanistan is the third, and arguably the best, book in Dalrymple’s history of the British in South Asia during the early and mid-19th century. Dalrymple is acknowledged worldwide as the finest British historian of India. In his talk, Dalrymple describes the hasty British takeover of Afghanistan in the 19th century, the First Afghan War, and the bloody defeat that soon followed.

Standing in front of a large screen onto which was projected various illustrations to the narrative he spun, Dalrymple talked fluently, if you can forgive him the odd expletive, about the first invasion of Afghanistan by the British in 1842.
Dalrymple described the first Afghan war as a battle between the two great imperial powers of the day, Britain and Russia. The British were represented by the East India Company, and the expansion of their empire meant that they were heading up one side of the Himalayas while the expanding Russian empire was coming to meet them from the opposite side. This was the beginning of The Great Game. Or as the Russians put it, The Tournament of Shadows – a case of creating a regime as opposed to changing one, in Afghanistan, then and now a powerful strategic stronghold.
Dalrymple described the mid-19th century Afghanistan as a tense land of spies, deposed rulers and ambitious tribe leaders, a land of shadows.
The East India Company at the time was made up of British soldiers and French mercenaries leftover from the Napoleonic Wars, as well as adventurers and private citizens.
Dalrymple said that Afghanistan, even today, has a habit of sucking people in, people who think they can establish a friendly regime and then move away. History says otherwise, he argued. The British made a suicidal invasion of Afghanistan, taking an ill-advised route through territory they did not understand nor are equipped for. However, though half their army was lost due to snipers, malnutrition and thirst, when the British arrived in Kandahar, the prevailing rulers fled. A new order with a puppet king was installed, without a shot being fired.
But the British mismanaged everything. Through bad military strategies, disrespect and arrogance, a native insurgency began and flourished. In 1841, jihad was declared and the British lost their leaders, stores and ammunition, and were starved into surrender.
The small remaining army was marched out into the cold Afghan winter, over rough terrain where they were shot at by hill tribes, whilst also starving and freezing. Only one man survived to make it back to a safe British camp.
Dalrymple described this journey of 18,000 men, women and children through a wall of snipers and deprivation as the heart and soul of the book.
Dalrymple also talked the audience through the tiny occurrences in private lives, a man falling asleep on his horse inadvertently alerting the British to the approaching Russian army. He also described his travels along the route of the British Army, recalling how every villager to this day could recount the narrative of the British defeat and the collapse of the East India Company. He also told an amazing story of the present day head of the secret Taliban police being a fan of his previous work!
Dalrymple spoke directly to the audience, prowling the stage from left to right and occasionally stopping at the podium to check his notes and finally to conclude. The illustrations he showed were mainly portraits of the key historical figures and a dozen or so depictions of the invasion and its aftermath, noting that the painters were predominately British. He had an effervescent manner and often had the audience laughing or shaking their head at the bizarre absurdities of the failed conquest.
His talk went over the allocated time and there was a defeated groan from the audience when denied the opportunity to ask questions. However, his performance and the amazing parallels he had drawn between history and the ‘games’ being played in Iraq at the beginning of this century were frightening. The simple lesson from history which was not learnt by subsequent empires was, he stated, don’t meddle in Afghanistan!