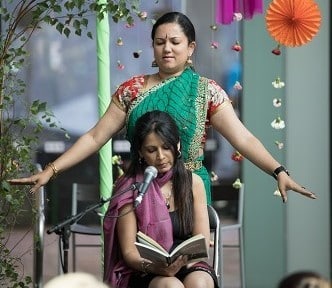 
Something intense happened on the 12th of February. I saw Melbourne shape-shift before my very eyes, and if you told me I was stuck in some sort of Harry Potteresque world, I just might’ve believed you. It was an ordinary Sunday, where Melbourne’s weather gods were duelling each other: winter unexpectedly challenged summer, which with little resistance, conceded defeat. I was in the rather ordinary atrium of Federation Square, but something extraordinary was unfolding in front of me.
An Aussie accent sounded out English words. But melding with the words were the sweet, familiar strains of a flute playing a Carnatic raagam Revathi. As these elements fused together, another joined them. Carnatic vocals rang out, and shaped the words being spoken. A dancer in a green sari joined the poet who was reading and swayed gracefully, her moves enhancing the spoken words.

I was at Melbourne’s first ever Jaipur Literature Festival (JLF), a collaboration between the Indian festival and Melbourne Writer’s Festival (MWF) as part of AsiaTOPA, the Asia Pacific Triennial of Performing Arts. Bringing Jaipur to Melbourne was the first thought for Melbourne Writer’s Festival Director Lisa Dempster, when asked to program an event as part of AsiaTOPA. Dempster, with producer Jasmeet Sahi and the MWF team, curated a festival with a diverse range of topics from urbanity to politics, travel writing to trans rights, and identity to interpretive art, steering clear of tired stereotypes of India, and presenting refreshingly varied content.

JLF Melbourne brought together a diverse group of writers from India, Australia and the Indian diaspora in Australia to participate in panels, performances and readings. The performance I mentioned was a part of a series of reading panels that ran all day to expose the work of festival guests to the audience. This non-traditional reading was called ‘Performing Poetry: Body as text’, where Indian-Australian poet Michelle Cahill’s poetry was interpreted by academic and dancer Dr Priya Srinivasan, supported by musicians Uthra Vijay and Sridhar Chari.

By bringing together poetry in the spoken word form and fusing it with music and dance, Srinivasan removed archaic and sometimes difficult-to-understand poetry that accompanies the traditional practice of Indian dance, but enhanced contemporary English poetry with layers of text, or meaning: instrumentation, vocals, gestures and the performer’s own body.

More traditional readings were varied in content.  Historian and writer Rakshanda Jalil read some of her Urdu poetry, columnist and essayist Sudeep Chakravarti gave a harrowing account of turmoil and bloodshed after the Babri Masjid demolition, and Roanna Gonsalves had the audience in splits while reading from her book The Permanent Resident. Academic and journalist John Zubrzycki talked about India’s rich heritage in performing magic, followed by a magic show that drew a large audience.
Earlier, the festival started off with a uniquely Indian and indigenous welcome to country, ‘Pranaam’. This was followed a talk by economist and urban planner Sanjeev Sanyal and a reading by poet, novelist and writer Sampurna Chattarji. Rapper and activist Sofia Ashraf, famous for her brilliant rap song against multinational corruption and abuse of human rights in Kodaikanal called ‘Kodaikanal won’t’ also performed, addressing, amongst other things, the expectation that artists’ art comes for free.

JLF Melbourne not only showcased existing work of writers and artists, but also had work commissioned specifically for the festival. ‘Writing our Melbourne’, a digital story-telling project developed by the Melbourne UNESCO City of Literature office, brought together three writers to write about Melbourne. These stories became part of an interactive app that people could use to explore parts of Melbourne. Editor Meelee Soorkia hosted a Q and A and readings by the three authors, Chetna Prakash, Rashmi Patel and Aparna Ananthuni who talked about identity, influences on their writing and their migrant experiences of Melbourne.

And it is this migrant experience that resonated so deeply with me when I watched the dancer in the green sari sway to Carnatic vocals, interpreting Australian poetry. As an Indian who has lived in Australia for eleven years, I have come to form two identities: an Australian identity to add to my Indian identity. These sit very comfortably with me, but on the day I realised how much of a gap there is in my lived experience of those identities.
While watching Srinivasan and Cahill’s performance, elements I had always experienced in silos – the Aussie accent, Carnatic music, classical dance, English poetry – came together and felt intimately familiar. I felt strangely satisfied, simultaneously realising that I had a thirst I did not even know existed, and that it was being sated. For me, the festival generally and Srinivasan’s performance specifically, brought together two worlds that seemed previously incongruous in a fascinating and surprising union, one that reflected not a binary Indian and Australian identity, but the singular identity of an Indian-Australian.