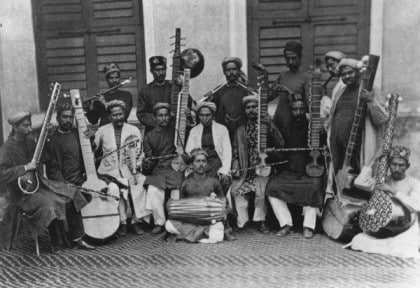 Most of the time we encounter them static and silent behind glass cases, but no object from the past lacks a story to tell. And the vintage Hindustani musical instruments from 19th century Calcutta, exhibited at Monash University’s Sir Zelman Cowen School of Music as part of the Confluence Festival of India in Australia, are no different. The collection of around 90 instruments came to Australia when they were sent as a contribution to the Melbourne International Exhibition of 1881, at the height of the British Empire, and in the midst of cultural ‘renaissance’ and intercultural explorations in India.

“They carry with them all these stories, and the stories are much more interesting than the instruments themselves,” says Dr Adrian McNeil, sarod player, ethnomusicologist and senior lecturer at Sir Zelman Cowen School of Music, who has also performed, alongside Bobby Singh, Damian Wright and Aneesh Pradhan, as part of Confluence.
The man who sent them was Surindro Mohan Tagore, an enigmatic character of the “Bengal Renaissance”, straddling both the colonial world and that of Indian classical music, whom McNeil describes as cosmopolitan and “an agent of modernity”. Tagore started the Bengal School of Music, designed new hybrid Western/Indian instruments (some of which form part of the Melbourne collection), and advised on curriculums for teaching music outside the hereditary community.

Tagore even created his own household ‘native orchestras’ to play fanfares for visiting British dignitaries, and composed intercultural music that included songs in praise of Queen Victoria, with a decidedly “chamcha” attitude that McNeil says made him unpopular after his death, particularly after Independence. And yet Tagore’s ideas were very much in the spirit of the hybrid, intercultural atmosphere of nineteenth-century Bengal, and it’s hard to rigidly categorise his work.
“Colonialism shuts down every other story and puts its own story in the front, so all these wonderful, really individual artistic relationships that were forming outside of that colonial discourse… we’re just discovering them now,” McNeil says.

In 1877, for example, Hindustani musicians went to London to perform as part of Victoria’s Diamond Jubilee. More astonishingly, research has shown that Indian musicians have been touring Europe since the 1700s.
Tagore himself in fact sent at least 20 similar collections of instruments around the world to places such as France, England, Belgium and Thailand. However, his motives were not wholly pure, for in the process he collected hundreds of titles, including Knight of a local philharmonic orchestra!

But the instruments of the exhibition also tell of another, much more discomfiting chapter of this greater tale of modernity in nineteenth-century India – the story of the appropriation of music from hereditary practitioners by upper-caste musicians such as Tagore, one that is yet to be fully explored and acknowledged.
“On one hand [musicians like Tagore] were trying to systematise knowledge according to Western music systems… on the other hand they’re trying to rewrite the history of music to exclude 600 years of the contributions of Muslim musicians who kept it alive,” says McNeil.

And of course, finally, there is the story of the isolated colony of Melbourne celebrating the glories of Empire by displaying artifacts from exotic lands such as India.
But what did Tagore’s intercultural music sound like? In 2014, McNeil, as part of a Creative Fellowship at the State Library of Victoria, adapted and performed pieces from the raga-based music Tagore sent to accompany his instruments around the world. Tagore had removed the ornamentations or gamaks to help Europeans better play it, but McNeil says that it does lack something as a result.

“It’s almost like he took out the masala!” he laughs, referring to the way the English adopted Indian curry, removing the chilli and creating something quite different from its true taste.
Curry and Empire? Hmmm…that’s probably another story!