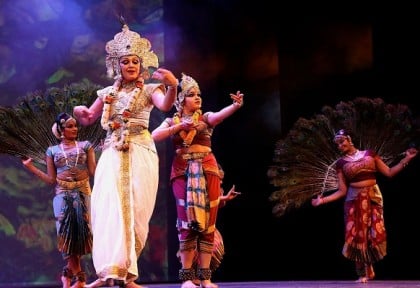 Shobana and her team charmed the audience with their powerful performance

She came, she performed and she conquered the minds of the audience. Padmashri Shobana, the internationally acclaimed dancer and actress, along with her highly talented crew, recently toured Australia with her latest production, Trance – Dancing Drums. An eclectic show essentially about harmony – in religious, rhythmic, musical and cultural aspects, the performance was a blend of vivid visuals, sonorous sound, appropriate multimedia tools and excellent stage presence put together to perfection.

The show started in a traditional Bharatnatyam mode, portraying Mahakali, the ultimate form of Brahman. The various forms of Goddess Kali were depicted. The initial portrayal was of the Goddess in turbulent dance shaking the world. Later came Kali uniting with Shiva, resulting in the formation of Nataraja, the cosmic dancer. Perhaps the most innovative element in the first part of the show was how modern electronic music accompanied the traditional dance performance.
Then came the story of ever-so-enchanting Krishna. Right from the mischief of little Krishna to the fabled story of Poothanamoksham, to Radha and Krishna’s love legend, everything was well illustrated. Krishna’s childhood stories were enacted through a solo performance by Shobana herself that showcased her eminence as an actress. Krishna wooing Radha amidst peacocks and deer was perhaps the most picturesque scene in the whole show.
Shobana took to the microphone and talked to the audience about how the rest of the show would be about spiritual harmony, and how elements from Islam and Christianity would be meticulously woven into it. Along the lines of what she said, what followed was a sheer contrast to what had been witnessed so far. A Tarana, which is a classical Hindustani composition based on a Persian or Arabic phonemes, was staged. The performance was set to the tunes of classical Sufi poetry, Kafi. It was a mystical experience watching the dancers swaying and twirling to the graceful Qawwali music.

The next segment of the show was preceded by a multimedia presentation. Examples were given showing how spirituality can often describe phenomena that science cannot. Video clips from all around the world, showcasing people of different nationalities and cultures, speaking in various languages, in different situations, were shown to the audience. Gradually, the concept of “One belief, different worlds” was introduced.
In this framework, the show moved to portray women of power from different religions. Mary Magdalene’s interaction with Jesus Christ was depicted through graceful movements of the dancers, apt costumes, Mediterranean backdrops, and soulful music which transported the spectators into the historical era. Again, what stood out were the histrionic skills and powerful emotions in the voice-over of the actress in Shobana, enacting the life of Mary Magdalene to sheer perfection!
From there, the final segment of the show, Dancing Drums, commenced. True to its name, it was an innovative performance that made use of drums as well as the bodies of the performers. The rhythm that emanated from the percussionist flowed on to Shobana (also a trained mridanga player) who used the two sticks in her hands to produce various rhythms on a variety of drums lined up on the stage, including a bottle of water and even the floor of the stage! The supporting dancers flicked between drumming, dancing, and setting the scene, merging themselves into the backdrop. What made it even more captivating was the way the danseuse interacted with the audience, adjusting the performance according to the responses from the audience and giving the scene a befitting climax.

Riding on the wave of the success of the show, the two time Indian National award winning actress, Shobana sat down to chat with Indian Link.
“The ever-evolving nature of the show is what makes it unique,” she said.
“The show that you saw here is not what it was like when it was staged initially. I have tried to nurture it by incorporating myriad elements into it as time progresses – the things I have observed, those that touched me and those I believed should be communicated to the world,” commented the doyenne. “And that is why I have used several mediums. The music, rhythms, dance performances, multimedia… everything has been given ample importance. I believe the story is complete only when it covers and combines all the different aspects.”
Once you have witnessed the artistic tapestry that she diligently weaves together, you realise that what she says makes sense. From the show that spoke volumes about powerful women around the world, there emerged this woman, Shobana, who carefully crafted her product with meticulous involvement in every step – from conceiving the plot to developing, to narrating to presenting it on stage.

The performance showcased the versatility of the lady herself, be it her dancing, acting or percussion skills, with every other dancer and musician knitted in around her.
After a slow start, it was interesting to see the tempo gradually increase as Shobana captured people’s undivided attention as the performance progressed.
The show underlined how Soorya Australia is committed to promoting refined art and Indian performance.
Photos: Shanu Majeed