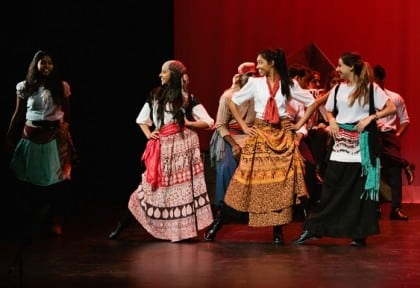 The Rolling Cowley exceeded my expectations from the start.
I knew the Maya Youth in Performing Arts team put blood, sweat and tears into bringing this year’s production to life. After all, these passionate young people have certainly made a name for themselves over recent years, known for staging glamorous theatre productions.
Attending their show recently, I was expecting high quality. What I didn’t anticipate was being so utterly captivated by a troupe of talented young actors performing on a set that looked like it had been brought to Sydney’s National Institute of Dramatic Arts straight from LA’s Universal Studios.
This was the real deal. A near life-sized dilapidated wooden pirate ship, designed by Macquarie University IT student Mathangan Paskarajothy, and built from scratch, stood proudly on stage. The play’s creative team had the theme down pat. Even the costumes donned were impeccable. It was nothing short of professional.
The Rolling Cowley (TRC) wasn’t the typical boy-meets-girl story with a pirate twist. And while it initially appeared to be a play about a ship of swashbuckling scallywags swaggering across stage with a bottle of rum in hand, (though Captain Kaye, played by Kawshalya Manisegaran, definitely had swag), it was so much more than that. In fact, TRC turned out to be an enchanting tale with a deep, resonating message about familial bonds.

According to Jasper Kyle, one of the producers of TRC, it was Maya itself that inspired the play’s main message.
“I was inspired by the familial nature of the organisation (Maya) and their willingness to embrace newcomers into the group,” Kyle said. “I wanted to demonstrate on stage that family isn’t divided by cultural divides or even blood divides, but it is defined by the care and protection individuals offer each other.”
The story revolved around Celeste (Heeral Thakkar) and James (Raviteja Kannekanti), adopted siblings separated as children during a pirate raid. Desperate to find each other again, their loyalties are questioned when they finally meet.
Heeral Thakkar did an excellent job portraying Celeste trying to grapple with the adage “Blood is thicker than water.”
She told Indian Link that conveying this struggle on stage was not easy.
“Celeste’s emotions are often conflicting because of the inner turmoil she faces when deciding between the pirates and her adopted brother who was separated from her ten years ago,” Thakkar said. “Bringing across this complexity in her emotions was the hardest part for me.”

For some characters though, like side-splitting comedian Barrels (Bhirajan Yogarajah), the choice between “blood” and “water” was much simpler. Madly in love with the sea, he was even “married” to it in an absurd scene of the play resemblant of Shakespearean farce. No surprises there, since TRC was partly inspired by Twelfth Night.
What set TRC apart from other plays I’ve seen showcasing Indian and Sri Lankan youth, is that it wasn’t laced with standard cultural stereotypes. Instead, culture was weaved into the storyline and subtly alluded to through the play’s complex characters.

Captain Saunders (Kirit Chaudhary) was presented as a navy captain of staunch adherence to the Empire’s dogmas. His values were somewhat allusive to the ways of thinking aligned with traditional East Indian culture.
However, it goes without saying that what made TRC truly inspiring, was its cast of charming young starlets from various cultural backgrounds. Young Celeste and James, played by Shreya Rao and Josh Singh, brought to the story a heart-warming innocence that only children could authentically deliver. And who could forget the feisty young narrator? Played by Charlotte Waite, her persona’s larger-than-life attitude was endearing, yet earned her serious respect as a budding young actor. Even Liam Nicholls, the tiny violinist, didn’t lose his poise while playing a jolly tune for the audience. With around 14 kids forming Maya Junior, the diverse organisation is definitely growing, which reinforced the play’s main concept of “family.”

All proceeds from the show were donated to two charity organisations – Palmera Projects and the Cerebral Palsy Alliance. According to another Producer of the play, Rahm Ranjan, this was a joint decision made by the Maya team.
“We wanted to support a local organization, but also wanted to support an organisation that had meaning for our members and the cultural background that a majority come from,” he said.
From the musicians and dancers to the dedicated youths working hard behind the scenes, each and every individual involved in TRC made the production a complete success and a pleasure to watch.
When producer Jasper Kyle was asked what he would have done differently, if given another chance to produce TRC, he replied, “I would make sure that the chocolates were not kept in the rehearsal room! As part of rehearsals this year we trained for half an hour before practice, and the chocolates made it very hard to get fit!” he joked.
Maya Youth in Performing Arts is a not-for-profit organisation. If you’d like to get involved, visit www.mayaarts.com.au