Watch a diamond crack under pressure 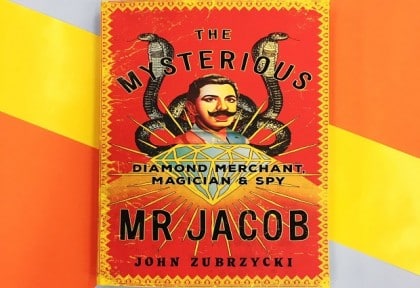 John Zubrzycki’s new book, The Mysterious Mr Jacob delves into the life of a jeweller well-known in British India

The Mysterious Mr Jacob is a non-fiction work from John Zubrzycki, the Sydney-based author of The Last Nizam: An Indian Prince in the Australian Outback.
The novel tracks the life of Alexander Malcolm Jacob on whose life Rudyard Kipling modelled the character of Lurgan Sahib, ‘healer of sick pearls’ in his novel Kim.
Set in the era of the British Rule in India, the novel weaves through a mindboggling number of characters, locations and sources to arrive at conclusions about the life and times of the mysterious Jacob.
It delves into the myth, rumours and conjecture surrounding the notorious jeweller and the fallout of a scandalous trial in 1891 that he was embroiled in.

With painstaking research, the author unravels Jacob’s plot to sell the ‘Imperial’, the world’s largest diamond, to the sixth Nizam of Hyderabad.

The sale turns into a debacle that leads to a sensational court case in Calcutta’s High Court, overturning Jacob’s fortune in its aftermath.
Zubrzycki pieced together old letters, court records, annotations on files and newspaper clippings to reconstruct the events of Jacob’s enigmatic journey.
Jacob, as the central character of this book, makes for an interesting read as a colourful personality who beguiles people with unreliable accounts of his past. His story changes often and makes the task of retelling it arduous for the author.
Zubrzycki maps Jacob’s early existence from Turkey to Bombay (Mumbai) and then his apprenticeship in the palace of Prince Afzal Ud-Daula in Hyderabad. He traces Jacob’s work in Calcutta, Dholpur and other richly appointed palaces of princes in India.
The book explores, at length, Jacob’s business and social standing in Simla, the summer capital of the British Raj. It finally makes its way to Calcutta’s High Court and Jacob’s ill-fated trial.


Much of the first half of the book revolves around the mystical side of Jacob’s character, his occult powers and influences over native princes in British India. It provides an insight into Jacob’s transition from being a penniless arrival to becoming a highly respected purveyor of precious stones in India.
His rags to riches trajectory was due to “his ability to find a niche to exploit, whether it was India’s fascination with fears of conjurors or a ruler’s belief that possessing the largest diamond in the world would bring him luck and status”, claims the author.
The second half explains how the world’s largest diamond, weighed at a whopping 184 carats, eventually became the cause of Jacob’s downfall. It was later renamed The Jacob and displayed at the Salar Jung Museum in Hyderabad.
Despite Zubrzycki’s meticulous findings, there are missing details, like the exact spot of Jacob’s shop in Simla, only one known image of him on a ceramic napkin holder and certain archives that cannot be located. The entire section of the cemetery, where his grave once stood, was bulldozed to make room for new plots. According to Zubrzycki, the mysterious Mr Jacob was as elusive in death as he had been in life.
The Mysterious Mr Jacob is an exhaustive work by a dogged researcher and an admirer of Indian history. Despite being disjointed at times, it provides plenty of fodder for readers to be engaged.
- Advertisement -
Share
WhatsApp
Facebook
Twitter
Linkedin
Previous articleIFFAA Cancelled
Next articleLong ride on my motorbike