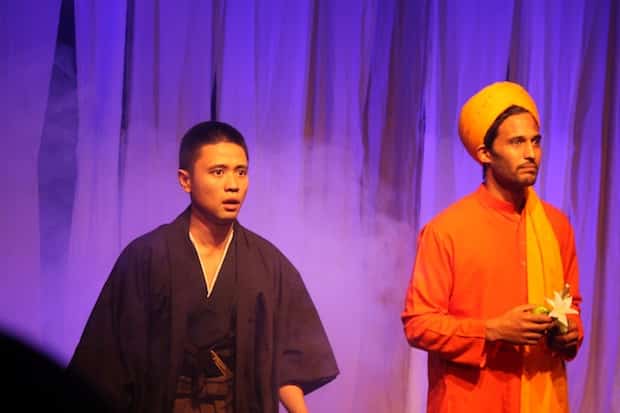 Following the success of the stage production Oneness: Voice Without Form in 2013, the Ramakrishna Sarada Vedanta Society of NSW have made another theatrical effort this year to send out the message of Vivekananda. Their ‘Vedanta Ten Minute Play Festival,’ showed at King Street Theatre Newtown in early June.

Short play expert Alex Broun, who directed Oneness, was at the helm of affairs again this year. The festival involved a journey of self-discovery through 22 ten-minute plays set in contemporary Australia as well as 18th century India.

Nearly 100 writers, directors and actors were involved in the production. Some 400 people came in to watch the festival over three days. The marathon of plays focused on a diverse group of historical and fictional characters linked by the theme of ‘humanity’s search for meaning and peace’, and was inspired by the teachings and life of the mystic Swami Vivekananda.

The audience included those who are acquainted with the teachings of Vedanta as well as many who are not. For them all though, the messages from the life of Vivekananda, as depicted on stage, would have struck a chord.

The grandmother who talks to the kids about equality of all creatures in Hand of God, a born again Christian woman who questions her mother’s apparent obsession with Vedanta and Yogic lifestyle (Before the Consecration), a man who undergoes a spiritual transformation after a near-death experience (What Happened to Barry), and the neighbours who squabble in Enchanted, all draw attention to Vivekananda’s philosophy of life.

In one of the most power-packed performances of the festival, actors Pheona Mulligan and Aishveryaa Nidhi performed in Guru Keith, a story about a man who keeps a terrible secret from his wife about the accidental death of their daughter. Instead of supporting his wife and sharing the burden of grief, he hides behind his new found philosophies of religion.

Mahila, directed by Aishwaryaa Nidhi and starring Aaron Scully and Tania Starr, was based on the Vedanta philosophy of reaching one’s fullest potential by work and mental discipline.

The Awakening told the story of the young Vivekananda’s encounter with the Goddess Kali which led to his deep spiritual arousal. Actors Veena Ramaswamy as Kali, Carlos Sivalingam as Ramakrishna and Robert Rhode as Narendra impressed in their roles.

A more contemporary tale,Vivekananda in 2020 was a perfect example of how the spiritual master’s teachings cross all the boundaries of time, places and cultures. While the latest in technology mayhave enabled user experience of the ‘present’ ‘past’ and ‘future’, has it really helped in solving our problems? Vivekananda became one of the speakers ‘from the past’, reflecting views that related appropriately to the modern world problems. Rajshri Roy as one of the conference chairpersons impressed the audience with her extraordinary dialogue delivery at the ‘conference’.

The Vedanta fundamental of selflessly taking up an idea and living, thinking and dreaming of it, was expounded beautifully in Sins of the Father. Learning that his father educated him through money raised from bribes, a young man decides to dedicate himself to educating poor children for free of cost.

That Swami Vivekananda transcends the boundaries of time and space came out loud and clear in Okakura and Vivekananda. Here, director Miyoko Hiramatsu brought us insights from the life of a famous Japanese art scholar Okakura who was greatly inspired by Vivekananda. A great story about conserving traditional cultures like the Japanese and the Indian, the play also symbolised Swami Vivekananda’s words, “Every soul attains perfection”.

Indeed, this was one of the many ‘take-away’ messages from the festival.