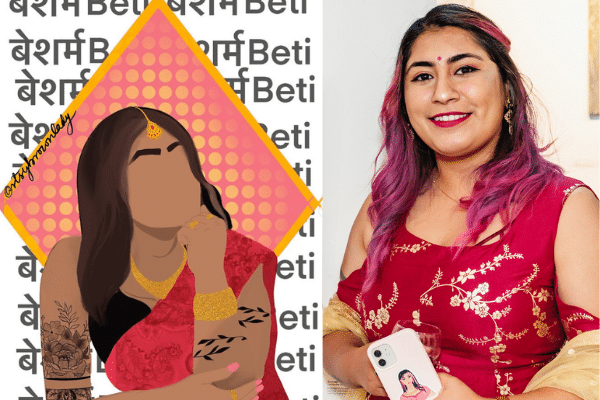 Alongside completing her master’s degree in counselling, multimedia artist Gurvinder Kaur has taken on another important project in the last few years: helping young South Asian Australians feel comfortable, even confident, in their brown skin.

Her Instagram art page Artsy Brown Lady, as the title suggests, is a celebration of our rich skin colour.

“I’ve had many families talk to me about their children developing a sense of hatred towards their own skin,” the family peer worker at Headspace told Indian Link. “There’s a real identity crisis in looking so different from their classmates, and I wanted to help them through that with art.”

Armed with her acrylics, Procreate tablet, and her imagination, Gurvinder’s art aims to provoke a response.

On International Women’s Day recently, she paid tribute to painter Amrita Sher-Gil, one of the greatest Indian-origin avant-garde women artists of the last century and a controversial figure in her own right.

“Her work touched many controversial topics like nudity, the resignation an Indian woman faces, and she led an unapologetic life where she was open about her sexuality and identified as bisexual in 1930’s India!” the caption read.

“An icon and truly a lady who forged the pathway for us future women. I’m sure she fought many battles with just the tip of that brush.”

Gurvinder added, “On social media, I know that people will follow my page if I have aesthetically pleasing artwork, but I believe art is more than that. It’s personal and yes, sometimes it can offend people. That’s why I subscribe to the term ‘artivism’ which combines activism and art.”

Perhaps her most ‘offensive’ pieces come from her unabashedly tongue-in-cheek series titled Besharam Betis (“Shameless Daughters”). Teasing older family members who frown at tattoos, poking fun at aunties who don’t like girls who drink or smoke, Besharam Betis is likely to strike a chord with most millennial women.

According to Gurvinder, it’s the culmination of a lifetime of tiny exasperating occurrences.

“Shortly after we moved to Australia in 2015, there was an incident when my sister uploaded a picture in a bikini and faced a lot of slut shaming from the aunties back home in Delhi,” she recalled.

“They were calling our parents, saying things like ‘you’ve lost control of your daughters’. Eventually, it reached a breaking point and I sent them a picture of myself in a bikini too!”

Another piece is inspired from her teen years.

“I was 15 years old, wearing an outfit that exposed my navel, and one aunty tried to shame me by saying, ‘we were never allowed to show our stomach’,” Gurvinder elaborated. “So, I created a piece of a lady holding her mug of chai, proudly showing off her navel without a care in the world.”

Through her art, the 29-year-old is a fierce advocate of intersectional feminism. It’s a critical concept, coined by Kimberle Crenshaw in 1989, that recognises a person’s social and political identities are a combination of numerous modes of discrimination and privilege.

“Intersectional feminism recognises that you can’t choose between race, gender, sexuality, and other social identities. You’re a combination of all of them. For example, white women may face discrimination in a male-dominated workplace but it’s important to acknowledge that women of colour in the same workplace have it tougher.”

Raised in a household with two sisters, Gurvinder wants to amplify the message of feminism and shatter any false notions that it somehow equals man hating.

“It’s about equal rights and respect. My mother-in-law was a homemaker and my mother worked, and both are respectable choices. There’s no right or wrong way to raise a family,” she pointed out.

Another crucial discussion that Artsy Brown Lady hopes to inspire is one of mental health in Australia’s migrant community. Based on her own experiences at Headspace, Gurvinder notes that many parents still struggle with misconceptions around the topic.

“I’ve noticed that parents are grieving in their own way, because they think their children are somehow less perfect because of any mental health conditions. But the fact is that it’s not an illness and there are many resources and facilities here in Australia to ease their journey, compared to back home.”

She added, “Some migrant parents see behaviours like the inability to get out of bed or go to school as disrespectful, after the sacrifices they’ve made to bring their children here. We work with these families to help shed such stigma for a more empathetic approach.”

The beauty of social media has meant that her message has been amplified to audiences around the world, including the diaspora in the United Kingdom, United States, Canada, and back home in India.

“I’ve had people tell me how my art, as a South Asian artist for young people, is valuable to the community. It’s feedback like that that keeps me going,” Gurvinder smiled.

“But the best feedback of all has come from young kids. My younger cousins love my artwork, and based on Instagram analytics, I see that my art is most shared by 12- to 25-year-olds. It’s an amazing feeling to know my art has moved them in some way. I hope it empowers them to talk about things they’d otherwise be afraid to voice out loud.”

- Advertisement -
Share
WhatsApp
Facebook
Twitter
Linkedin
Previous articleCould I have had COVID and not realised it?
Next articleBihar-born Dr Ashish Jha appointed top official for US COVID response