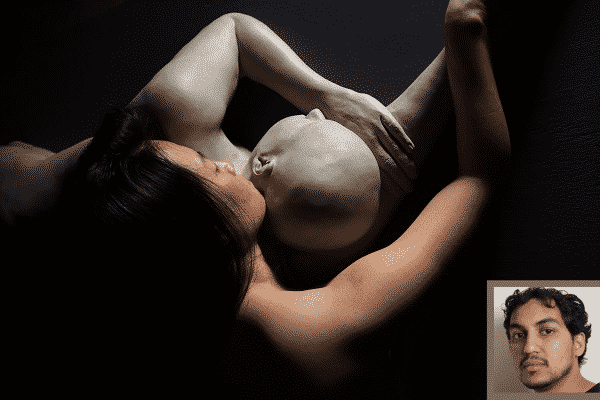 Three Indian-origin artists are among the finalists in this year’s Wyndham Art Prize in Melbourne.

Sydney artist Arun Kumar Sharma, and Melbourne’s Raj Panda and Payel Dasgupta are among the 19 finalists whose works can be seen at the Wyndham Art Gallery.

Melbourne-based stylist, writer, creative director and artist, Gideon Wilonja took out the top award in this year’s Wyndham Art Prize for his photograph Soft. It comes with a $12,000 cash prize.

Now in its seventh year, the annual contemporary art prize attracted 300 entries from artists across the country, who submitted works in paintings, sculptures, video, prints, drawings and ceramics.

Sydney artist Arun Sharma’s work in the Wyndham Art Prize combines his passion for sculpture and photography to create a stunning piece. A photographic image, it shows a person in embrace with a sculpted human form.

Striking and emotional, it draws the viewer in. The sculpture is ‘whole’ now, but it won’t be for long, we learn. “It is currently left outside to break down naturally, and as it does so, I will be photographing it again with the same human form,” Arun revealed to Indian Link.

The entire work, set to become a series of photographs, is evocative of the process of life, of creation and decay, but is also much more.

“The piece talks about the human experience of putting relationships together, and families, and how sometimes relationships fall apart through loss. I wanted to convey that more emotionally than intellectually.”

Describing his work, Arun added, “In the past I’ve made sculptures where the piece breaks down (during the course of) the exhibition gradually and organically. This time I thought it might be beautiful to have real people next to these eroding sculptures.”

The intriguing quality of the work comes from its melding of sadness and optimism.

We learn later that the figure in the artwork is Arun’s wife. Is the sculpture then, a self-portrait sculpture, we wonder.

Arun Sharma was born and raised in New York, USA, showing a passion for art early on in High School. He took a Master’s degree in Fine Arts from the University of Washington and a second Masters of Ceramics in the UK.

Arun has exhibited widely in the USA, Europe, Asia, Canada, and Australia.

He met his wife in Japan, and they moved to Australia in 2011. Currently living in Sydney, he is pursuing his love for art primarily with 3D based art.

READ ALSO: Art By Heart: A community platform for artists and craft makers 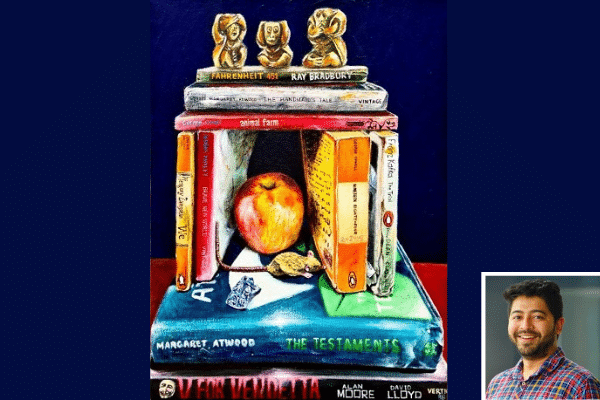 An engineer by profession, Raj Panda initially picked up painting as a hobby. He has since developed his skills, as a form of self-directed therapy.

“I came to Australia in 2007 as an international student to study Engineering,” he told Indian Link. “I was dealing with depression at the time, so art became a creative outlet. It was a way for me to externalise the trauma created by the adjustment to sudden change.”

In 2013, he began submitting his art for shows and prizes, finding it a good way to develop his skills. He also started experimenting with different mediums such as sculpture and photography.

“Most of my art is focused on social and political commentary with a bit of cheekiness!”

Triggered by a UN article, Raj’s submission for the Wyndham Art Prize, Dystopian Migraine features several dystopian novels including Fahrenheit 451 by Ray Bradbury and The Testaments by Margret Atwood. The books stand assembled with other artifacts from across his house to create a gateway of sorts.

“I call it Dystopian Migraine because it’s a reflection on the rise in dystopia and right-wing nationalism around the world. The classic novels in the painting were picked because they predicted this chaos.”

Using literary works as themes in his paintings has become a recent passion for Raj.

From the western suburbs of Melbourne, Payel Dasgupta describes herself as an “amateur artist”.

“I’ve always been interested in art – paintings and sketches mostly, but it was during COVID-19 and being stuck indoors that I finally had the opportunity to pursue it with more passion,” she told Indian Link. “Raising a young family, I never had the chance to spend much time on it, but last year gave me what I needed. It resulted in several paintings and sketches being created. I also pursued my other passion of photography!”

The camera came out frequently on lockdown walks with the kids, as the neighbourhood offered up new vistas, or perhaps new perspectives.

“It all started with photographs of the kids, but soon I was expanding my portfolio.”

Payel’s submission for the Wyndham Art Prize, titled Perspective, is an intriguing black and white image. Is that tree trunk freakishly long…?

“It’s all about perspective, isn’t it?” she laughed. “Hence the name Perspective.”

Payel currently runs @artwithheart and continues to pursue her enthusiasm for art, no matter the style.

The exhibition is on at the Wyndham Art Gallery until 27 June.