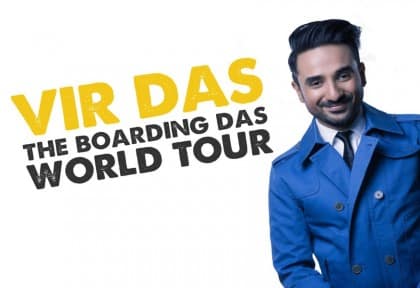 It’s Friday night. I’m in the back of an Uber with a few friends trying to make our way to the Factory Theatre in Marrickville. It’s raining ferociously and I wonder if we’ll make it in time. Then again, being late to events is understood to be a definitively Indian stereotype. I was doing an admirable job living up to the cliché.

The person inspiring such urgency was none other than Indian comic Vir Das, here in Australia for the first time, bringing his Boarding Das tour to Sydney and Melbourne. Though he has been a well-known entity in India for some time, the recent success of his Netflix special Abroad Understanding and a spot on the late show Conan in the United States, have introduced him to a more global audience. This is evident from the makeup of the audience here to see him live. Yes, there are a lot of Indians, but I’m pleasantly surprised to find a fair spread of other nationalities and cultures as well.
As the spotlight hits the stage, Das appears, a guitar slung across his shoulder, amidst loud cheers and whistles. It has been a long journey, filled with hard work.
When Das first appeared on English stand-up comedy scene in India more than a decade ago, it wasn’t the bustling hub of innovative talent that we find today. There were no acts like Daniel Fernandes, Neeti Palta or Kenny Sebastian; there was no AIB, TVF, EIC, or the numerous other comedic outfits Indian audiences have become familiar with. Das appeared at a time when the art form was still growing and finding its feet among Indian audiences. Since then, he’s diversified his portfolio, acting in Bollywood films like Delhi Belly and Go Goa Gone as well penning regular comedic columns for various magazines and publications.

“I think it [stand-up comedy] is finally a viable profession because the novelty factor is gone,” Das says. “Now, you no longer have to be a comedian, you have to be a good comedian. And that’s the phase where real innovation starts to happen. So, right now it’s in that really exciting phase. It’s also that kind of profession where now kids can tell their families that this is what I want to do with my life and they are not as shocked as they would’ve been ten years ago.”
At the outset, it is clear Das isn’t here to mine cheap laughs and just pander to the audience. His goal is a lot more ambitious. His humour relies on active engagement from the audience, and that engagement is not limited to having a tokenistic conversation with a few people in the front row.

You actually have a silent, internal dialogue with yourself and with Das on stage. Every time he breaches a somewhat “taboo” area, you question your own stance on the issue he is talking about.

“In terms of talking about the tough stuff, you can’t – when that’s your set list – racism, homophobia, you can’t say some trivial shit about racism,” Das says. “You can’t half-arse that discussion. If you’re going to talk about Islamophobia, you have to talk about Hinduism. If you’re going to talk about Hinduism, you have to talk about sati. Because this is where we are. If we talk about Indians being victims of hate crimes when we go abroad, we also have to talk about the fact that Indians are racist towards visitors who come to India as well. It would be hypocritical to not talk about those things.”
Das is at ease playing with the ‘stand-up’ format and its conventions, willing to change things up from the show becoming simply a talking heads routine. The highlight of the show is a surprisingly delightful, three-minute silent re-enactment from a scene in the Hindu mythological story, the Ramayana.

In between all the topical issues, Das also finds a way to connect with the audience on a personal level. The cultural diversity of his upbringing affords him a unique and insightful perspective on life. The show is sprinkled with personal insights about his childhood, particularly the experience of growing up in a place like Africa, something he hasn’t yet opened up about before.
Where we find ourselves today, in a world full of absurdity – where it is impossible to distinguish fact from fiction – it is a time ripe for intelligent comedy to thrive. What then, is the role of a comic today? You can open the newspaper and just read out a headline and that probably is a punchline to some cruel joke.
“It’s our [a comic’s] job to be able to give you enough visuals to be able to read that newspaper. That’s really all our job is,” says Das.
“It’s not to socially comment, if that happens, well and good. It’s not to change your perception, if that happens, well and good. And nine times out of ten it is coincidence. That I can tell you. Comedians write these really poignant bits and we think these are the ones that are going to get traction. And suddenly, something else gets traction. Like, in the Netflix special, I never imagined ‘once you go brown, the other colours let you down’ would be the most call worthy line of the special. I had written bits about racism, about homophobia and about religion, but that’s the one that stuck. You can’t plan these things.”
“There’s blurred shit happening everywhere,” Das says. “You’ve got Donald Trump. In India, you’ve got gaurakshaks, you’ve got beef bans. You’ve got Brexit. It’s a crazy world. But who is to say it’s any crazier than how Lenny Bruce felt about the world when he was doing stand-up comedy. Or Richard Pryor felt about the world when he was doing stand-up comedy. It’s the job of a comedian to kind of look around and say, okay all this shit is messed up and I’m going to make light of it.”
At the end of the night your cheeks hurt from all the laughter, but more importantly, you pause and question your own certainties and come away with a renewed appreciation of the diversity in thought, culture and ways of thinking around the world. In that introspection by the audience at the end of the show lies Das’ greatest triumph as a comedian.
Ladies and gentlemen, we finally have an intelligent, subversive Indian comic ready to introduce himself to a global audience. Please welcome, Vir Das.