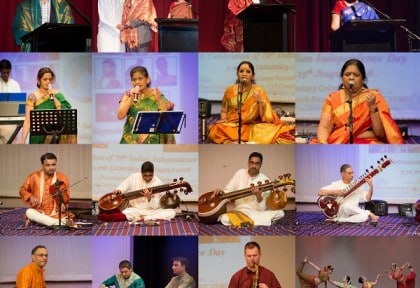 In Sanskrit ‘Vishwa’ means, amongst other things, ‘world’, ‘universal’. And in honour of India’s 70th anniversary of Independence, different worlds of performing arts came together on 13 August for the Federation of Indian Music and Dance Victoria’s annual concert.
FIMDV, founded in 2010 under the auspices of the Federation of Indian Associations Victoria (FIAV), has since held several concerts that celebrate the diversity of India’s performance cultures. This year’s concert, entitled Vishwa, was no different, bringing together performing artists from various classical traditions, to a packed and enthusiastic audience.

President Dr Rama Rao emphasised how particularly appropriate the title of the concert was, “considering the current geo-political climate”. FIAV president Vasan Srinivasan also spoke of a need to “come together”.
And the concert certainly proved the worth of these ideas.
First was a ‘Mallari’ from the South Indian temple tradition: a piece of ritual music played for the resident deities of a temple when they are taken outside on procession. Sridhar Chari of Laya Vidhya Centre led the piece on flute accompanied by his flute and mrdangam students, in a fluid piece that showcased the rhythmic complexity of South Indian percussion, and the versatility of the flute.
Next came ‘Vishwa Vitthala’, a duet performance of abhangs by seasoned Melbourne musicians Shoba Sekhar and Jayashree Ramachandran; meaning ‘no end’, these devotional songs in Marathi are dedicated to the god Panduranga Vitthala and often sung by pilgrims as they travel to his temple. Supported by Murali Kumar on violin and (with a nice appositeness) Pandurang Torvi on tabla, the catchy beats and joyful lyrics swept up the audience, evoking the melding of the popular and devotional in Indian musical traditions.
The concert then turned to an interesting fusion of light and classical music as Rama Rao and Uthra Vijay, also accomplished senior vocalists of the Melbourne performance scene, came together for ‘Ek Sur’ (‘One Sound’), a rousing exploration of ‘unity in diversity’ through songs written in different languages, but set to one raga, Sindhubhairavi. They were backed by a range of instruments, Pandurang Torvi on tabla, Sridhar Chari on tabla and Ravi Kiran and Sandeepan Pushparaj on keyboard.

However, the most diverse piece, musically speaking, was ‘Pravaha’ (literally, ‘current’), a segment that brought together no less than eight expert musicians from the Hindustani and Carnatic classical traditions – Sridhar Chari on mrdangam, Murali Kumar on violin, Radhey Shyam Gupta OAM on sitar, Ramnath and Gopinath Iyer on veena, Nicholas Buff on saxophone, Saby Bhattacharya on sarod and Pandurang Torvi on tabla. Taking the Hindustani raga Yaman and the Carnatic raga Kalyani, both of which use the same notes, albeit in completely different ways, they embarked on a musical journey that explored the two ragas and their distinctive heritages. The result was something truly unique – a happy weaving of two styles that aptly symbolised the meeting and mingling of different ‘currents’ of musical tradition.
The final segment of Vishwa was another significant collaboration, a dance-drama, directed by Tara Rajkumar OAM, about the famed female freedom-fighter of 1857, Lakshmibai, Rani of Jhansi. This performance incorporated four different styles of Indian classical dance -Bharatanatyam (Ushanthini Sripathmanathan and students), Kuchipudi (Shyama Sasidharan), Mohiniyattam (Nithya Gopu Solomon) and Kathak (Mohini Bordawekar).
Councillor Jim Grivokostopoulos of Manningham City Council, one of the guests of honour, praised the Indian community for being able to come together through one platform.
Indeed, in a time of growing conflict, suspicion and fear over ‘difference’, it’s worth keeping in mind that, in India, and especially here in Melbourne, our diversity of performing arts traditions have never prevented us from seeing ourselves as one.