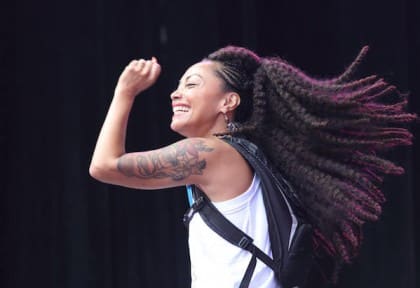 In its silver jubilee year, WOMADelaide still holds the charm

Any visitor to Adelaide in the month of March is sure to be caught up in a cultural cascade as the city reverberates to hundreds of shows in all sorts of artistic forms. In fact a festival atmosphere descends from mid-February onwards with the start of Fringe where anyone with some histrionic skills can have a platform to show their talent in music, dance, comedy or whatever.
Then there is the fortnight-long Adelaide Festival for the aficionados. Writers Week at the beginning of the month attracts hundreds of book lovers to hear those authors whose works they have savoured.
Even amidst this cluster bombing of cultural events, a loud roar emanates from machines with a lot of horsepower in the form of Clipsal V8 car race in the streets of CBD.
There is also a race with much less but real horse power at the Adelaide Cup where the animals attract an adoring crowd. At the far end of the month is the Indian community’s mela that has grown into a whole day affair.


To me the four-day open air world music and dance festival, WOMADelaide, has become a must in the past few years. This year was its silver jubilee. Having started in 1992 as a biennial event, WOMADelaide has become an annual musical extravaganza with musicians of every genre – form the divine soul-soothing south Indian classical to hip-hop, foot-tapping Afro, Spanish and West Indian wild rhythms.
Even if some of the fare offered doesn’t take your fancy, hundreds of people twisting, turning and twirling their torsos to those beats is a thing to watch. It is just amazing.

WOMADelaide is much more than a musical bonanza. Besides the feast for ears, it offers serious thought-provoking sessions in the form of Planet Talks where renowned speakers espouse environmental issues. There is also culinary feast with food stalls of every ethnic kind and also art and craft shops making the event a mega multi-cultural mela.
As in the past, WOMADelaide featured two events with Indian flavour – The Manganiyar Classroom from Rajasthan and South India’s Sudha Ragunathan. The Manganiyar Classroom, according to WOMDelaide Director Ian Scobie “stole the hearts of all”. No one would have expected a bunch of school children from a remote Rajasthan community to put on such a captivating show.
The programme featured 35 boys aged 8 to 16, all inheritors of threatened musical traditions revived by Keralite director Royston Abel, battling hilariously with their disciplinarian teacher’s conformity of traditional classroom routines. They eventually won him over, having him join in their singing, admitting that every human being has a sense of music that should be given room for expression and not suppression.
Kudos to organisers for unearthing this gem from rural India, just like they did with the gymnastic Malacomb a couple of years ago.

This being her second outing at WOMADelaide, it would have been a strange but not an unfamiliar experience for Sudha Ragunathan to sing for an audience sitting under huge Moreton Bay fig trees on a moon-lit night. While a traditional Carnatic music programme stretches a good two and a half hours, she had to tailor her programme within the allotted one hour.
Yet she managed to sing five songs including the main piece in raga ‘Shanmugapriya’ with alap, niraval and thani avarthanam for the percussionist. She started with a Varnam in Vasantha raga and moved on to Dikshitar’s ‘Vathabi Ganapathi’ in Hamsadvani, then Purandara Dasa’s ‘Narayana nine’ in Suddhaa dhanyasi and concludied the evening with ‘Bo Sambo, Siva Sambo’ in raga Revathi.

In one of the five Planet Talks sessions ‘What’s God got to do with it?’ speakers included members of Jewish, Islamic and Christian faiths. The first two speakers spoke in length how their religions stood for saving the planet. I am mystified why there was no representations from the Buddhist or Hindu faiths, each having over a billion followers, to speak on their strong green credentials and respect for flora, fauna and all things in nature. Couldn’t the organisers find any authoritative exponents? This needs to be addressed so that a balanced viewpoint is presented.
The four-day event attracted some 90,000 visitors, fewer than the previous year’s record. But nothing should take the credit away for organising more than 400 artists from 30 countries and presenting programmes non-stop at seven different stages for four days.
- Advertisement -
Share
WhatsApp
Facebook
Twitter
Linkedin
Previous articleFill this land with harmony
Next articlePakistan revolution can be to India’s gain