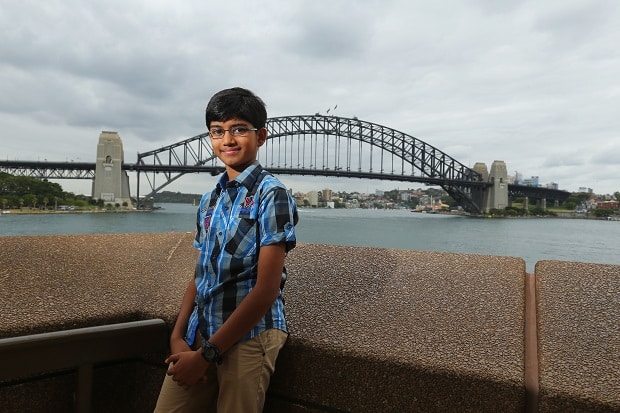 At just 11-years-old, Jonah Vetticad can proudly boast of being the director of a successful short film. The Year Six student directed the four-minute film I Can See You, which was selected as one of 15 finalist films from more than 300 entries in the Trop Jr competition, the world’s largest short film festival competition.

Jonah said he “felt amazing” when he found out his short film was received so well and would be making it to the finals of the competition. “I didn’t think it was real, that it was actually happening. I was astonished,” he told Indian Link. The film was one of 15 finalist short films made by under 15-year-olds. Jonah was the youngest competitor among the finalists.

Along with eight fellow students from St Ita’s Primary School, Jonah co-wrote and directed the film as part of a school project. The film is about an average schoolboy, Jeffrey, whose task to grab a few books from the old school library turns into a terrifying adventure.

“I was sitting in the library when a book fell off the shelf and onto my head,” Jonah said of his inspiration for the film. “I thought, ‘why not make books fly in the movie.’”

Jonah’s dad Alexander Kaduthanan said he and wife Sunita Alexander were very proud of their son’s achievement. “He has a natural talent with reading and writing skills,” Alexander said. “This was a natural progression for him.”

As part of the classroom project, Jonah’s teacher helped allocate roles according to each child’s skills. Jonah was deemed to have good leadership qualities and was given the director role. The children were also given lessons from a film graduate from the Queensland College of Arts in film industry techniques.

It wasn’t a completely smooth film shoot, with problems with the boom not recording sounds, and the need for many takes in certain scenes. “But it was great to learn about movie making,” Jonah said.

Jonah said the experience has motivated him to pursue a future career in film. “This has been a really fun experience,” he said. “If my first movie has gone this far, I’d like to make another one.” The budding director already has an idea for his next film, a comedy told from a child’s point of view. “I get ideas from what happens in real life,” Jonah said.

Born in Kerala, Jonah and his parents, along with sister Amelia, moved to Australia eight years ago. He is fluent in Malayalam and English, but he explained that his Indian background means he likes Bollywood films “best” and that his recent favourite is Happy New Year with Shah Rukh Khan. “SRK is awesome. He’s entertaining and great!” Jonah said he is inspired by Indian movie director Priyadarshan. “I like anything that entertains the audience, horror, thriller, comedy.”

Jonah and the film’s main actor, Jarvis Trenorden, who played Jeffrey, travelled to Sydney for the official finalist announcement.

The Trop Jr event was held as part of the Tropfest festival in early December in Sydney.