This is our city in summer 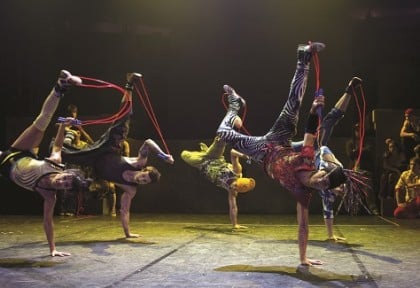 What does summer mean to you? Warm, humid nights, ice-creams at the beach, retreating inside to the cool of an air-conditioned lounge…
Every year in January, Sydney Festival whirls into town amid a flurry of activity. A bold celebration of Sydney’s diversity, there’s something in the program to entertain even the harshest of critics.
“Sydney Festival reflects the hopes, ambitions, dreams and sense of fun of being in a large modern city when it’s time to come out and play,” says Festival Director Wesley Enoch. “The Festival has always been about the people who enjoy Sydney in summer, whether from far afield as international visitors or as close as Parramatta; from all cultural backgrounds; young or old; art lovers or thrill seekers.”
This year’s program is a celebration of Australia’s indigenous heritage and colonial past as well as looking to be inclusive and accessible for a diverse, modern audience. It’s about redemption through the shared catharsis of the arts.
“I’m a living example that art can make a difference in your life. Art gives you a sense of beauty and meaning in the world and encourages you to participate in your community,” says Enoch. “As we increasingly disappear into the digital and virtual worlds it’s important to have moments when you can connect with friends and family (and strangers) in the place where you live. Reaching out and being part of something bigger than the individual citizen helps you, helps others and helps really build a city.”
In Parramatta, Riverside Theatres and The Spaghetti Circus Big Top in Prince Alfred Square will play host to a celebration of all things circus as part of the dedicated program at Circus City. At Hyde Park, experience a labyrinth of endless mirrors as part of the immersive art experience House of Mirrors, or enjoy a free summer evening performance at the new Village Stage. Indeed, Sydney Festival 2017 comprises 150 events, a staggering 73 of which are free!
More than any other cultural event, Sydney Festival defines Sydney’s personality. But how to choose what to see?
Here we present a selection of top picks to help you personalise your program for the festival that helps bring our harbour city to life!

Campbelltown Arts Centre and Sydney Festival present the first major exhibition by artist Myuran Sukumaran along with a series of newly commissioned artworks by leading Australian artists, Abdul-Rahman Abdullah, Safdar Ahmed, Megan Cope, Jagath Dheerasekara, Taloi Havini, Khaled Sabsabi, and Matthew Sleeth, whose works respond to the death penalty and profile human rights.
Curated by Ben Quilty and Michael Dagostino, Another Day In Paradise presents a vast and sobering series of powerful portraits by Sukumaran, painted during his incarceration at Bali’s Kerobokan jail and from his final incarceration on Nusa Kambangan Island.
This exhibition highlights the importance of forgiveness and compassion for humanity, while proving the profound power of art to change lives.

In an epic, adrenaline-fuelled choreographic match, a dream team of 11 female dancers make the moves of the football field their own. From the training drills to the victory dances, contemporary dance and soccer collide.
From director Martin del Amo, Champions harnesses the energy and enthusiasm of sports fans and celebrates the talents of elite performers.
Developed in consultation with coaches and athletes from the Western Sydney Wanderers’ W-League, the work features playful pre-game analysis and commentary by Channel Seven sports presenter Mel McLaughlin.

Circus City is a collection of shows, a big top, an outdoor trapeze, circus workshops, talks, films, an exhibition and a series of events for circus professionals.
A celebration of the circus arts running over 10 days, this is a family friendly program with an extraordinary range of free and ticketed events on offer.
There will be a range of fully accessible free circus workshops, presented by Aerialize, suitable for everyone from tiny tots to seniors.

A fascinating labyrinth of endless mirrors, magnified to terrifying dimensions, House of Mirrors will mess with your mind. Stumble your way around thousands of disorientating optical illusions and lose yourself in some bewildering reflections. There is only one way into the House of Mirrors. Getting out is an art!

In May 1967, as civil rights movements worldwide were at their peak, the referendum to remove passages in the Australian constitution which discriminated against Aboriginal people passed with a ‘Yes’ vote of over 90%.
As we near the 50th anniversary of the 1967 referendum – a crucial milestone in the ongoing struggle for the rights of Indigenous people in Australia – it’s clearer than ever that such victories are to be celebrated. In this stunning show, performed on the land of the Gadigal people in one of Australia’s most recognisable modern icons, some of the greatest songs of the civil rights movement will be reinterpreted by Aboriginal and Torres Strait Islander stars, including Dan Sultan, Thelma Plum, Radical Son, Leah Flanagan, Emily Wurramara, Alice Skye, Ursula Yovich and Yirrmal, as well as award-winning artist Adalita.

Urban Theatre Projects (UTP) gives audiences unforgettable experiences in unusual locations. For their latest venture, they invite us into three tales unfolding in a multi-level car park in Blacktown – exploring different ideas of what it means to be ‘home’.
With Aboriginal Elder Uncle Cheeky as your host, Home Country shares perspectives on place and identity. Over the course of the evening (which includes a communal feast) meet Ali from Algeria and neighbour Zaphora who clash over cultural values, sharp-witted Pita caught between the old and new Greek culture and the Blacktown angel, restless in the afterlife.
Written by Andrea James, Peter Polites and Gaele Sobott, and directed by UTP’s Artistic Director Rosie Dennis, Home Country is a theatrical triptych blending the intimate and the universal. Go on the journey as the sun sets over the Blue Mountains.