The woman behind the voice 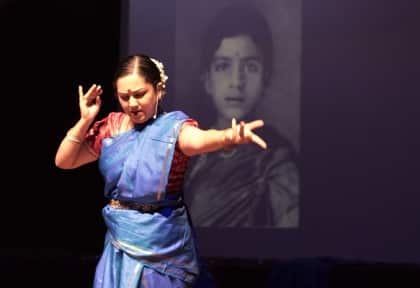 Hers is the voice that wakes the gods. The suprabhatam voice. The voice of Meera, that calls out for giridhar nagar. The voice of peace and unity, in Maitreem Bhajata. The voice of renunciation, in Bhaja Govindam.


I am, of course, speaking of Bharat Ratna M.S. Subbulakshmi (1916-2004), a living goddess of music in her own time, and a legend in ours.
Subbulakshmi’s musical voice is known all over India and beyond: sublime, perfectly aligned to shruthi, and deeply devotional.
But what was her inner voice? What guided her as she grew up in a Devadasi family behind the Meenakshi Amman temple in Madhurai, ran away to Chennai at age 17, and married a Brahmin man 14 years her senior?
My father, a Brahmin, lived on the other side with his wife and children. You see, my mother was a single parent… She never married my father. She couldn’t.
As part of the MS Subbulakshmi birth centenary concert hosted by Sridhar Chari’s Laya Vidhya Centre on 18-19 June – which saw performances by both local and international artists, including OS Tyagarajan and OS Arun – dancer and academic Dr.Priya Srinivasan performed an innovative ‘talking dance’ piece that explored and reflected on Subbulakshmi’s life in the musician’s own ‘voice’.
“We don’t need to lose our culture in order to tell alternate stories,” Srinivasan tells me.
Dancing from the age of five, her family migrated to Australia from India when she was eight. She then trained with Dr Chandrabhanu and eventually performed with his trailblazing Bharatam Dance Company, before heading to the States to pursue a Masters in Dance Ethnography at University of California Los Angeles and then a PhD at Northwestern University. Her PhD dissertation became her first book, Sweating Saris: Indian Dance as Transnational Labour, which explores dancers as labourers and transnational workers who face challenges of gender, race and citizenship. After years of research and performance abroad, Srinivasan is keen to revitalise the Melbourne South Asian performing arts scene.
“I’m interested in what is possible as a pathway for the next generation of artists, and how we can be both classical and contemporary.”

Thus, in her performance, she wore a nine-yard sari and a circlet of flowers in her bun à la Subbulakshmi, but incorporated spoken word, abstract movements, and images into her performance to illuminate more contemporary ideas of the singer’s life.

You see, women were no longer permitted to sing on stages. My mother and her arts had been taken over by Brahmins, Brahmin men to be precise.
Srinivasan’s use of Subbulakshmi’s musical voice  – rich compositions such as ‘Srimannarayana’ and ‘Hari Tum Haro’ – was a graceful way to incorporate her imagined ‘real voice’, and speak frankly of realities that shaped the singer, as the daughter of a Devadasi in a time of damaging change for the community. Subbulakshmi’s mother, a veena player who was left to fend for herself, raised her family in poverty.
“Usually Devadasis and Brahmins worked together… they were often in intense relationships and supported one another,” Srinivasan says. With the decline in patronage and support of the Devadasi community however, came an appropriation of their art forms by, undeniably, Brahmin men.
In 1940, Subbulakshmi married the widowed Brahmin T.Sadasivam. It was a worthwhile partnership, Sadasivam was instrumental in the rise of the singer’s star.
I embraced the Brahminical way of life… he never asked me to cook or clean… He let me focus on sound. So I did.
Despite this compromise, however, the Devadasi’s daughter has the last laugh in Srinivasan’s interpretation: she was always known as MS Subbulakshmi, Madurai Shanmukhavadivu, her mother’s name.
Whenever any of you utter my name you will be uttering the name of a Devadasi… always she will continue.
Photo: Arun Munoz