The taming of the writer 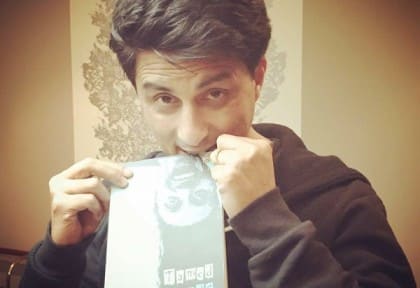 Melbourne writer Sanam Sharma’s love affair with words found liberation and encouragement with the recent release of his first book contrarily titled Tamed Words. Through his collection of 36 poems, Sanam attempts to discipline words in mind, in heart, in silence and in life, taming words that have crafted his past and will create his future.
Sanam’s poetry collection takes the reader on an observational journey of the inner landscape that absorbs him. His creativity is in the pruning of thoughts and constructing words artistically to make a garden bed of both flowery and prickly subjects. In his poem ‘The Flawed City’ you feel the anguish of a rape victim and lament the apathy of a headline seeking city. In ‘That First Love’, and ‘The Toddler’ you share the joy he finds in his relations. Often he digs into dark recesses of mind, soul or situation to unearth vivid imagery.

Sanam Sharma’s first literary attempt faced the inevitable challenges involved in turning a manuscript into a finished product. Juggling a corporate career, family commitments and his hobby, he persevered even though the progress was slow. There was also the steep learning curve involved in grasping the convoluted publishing process and dealing with the rejections. The book contract was eventually picked up by India-based publisher Authors Press. It is selling at an affordable $12 or Rs. 250.
Sanam migrated to Australia from a small town near Amritsar,  India in 1999.
“I remember when I left home my family in India described my prospects as rather bleak. Iska kuch nahi hona was the common sentiment,” said Sanam with a laugh.
Contrary to their predictions, Sanam studied, drove cabs, and lived it tough but with hard work and passion paved his way towards corporate success in human resources.
Through all this he remained faithful to his craft, writing at every opportunity – in airport lounges, in cafes, on holidays – whenever and wherever possible. Taming words is a relentless pursuit for Sanam and it reflects in all his work. Besides stringing precious words into poetry he also contributes to a blog on The Huffington Post, freelances for publications, and dabbles in radio.

“Ever since I was a child I have been inspired to write by my father, who is a published writer. I would sneak into his library and read from his collection of poems and books,” said Sanam describing the start of the process of penning down random thoughts on bits of paper, some of which were promptly lost.
“When we settled down in Melbourne, my wife, Jasdeep, encouraged me to put it all together and get it published. For me this book is a legacy to my son Arjun, something for him to remember me by.”
Sanam’s short poems are easily accessible on a first reading, but however you are tempted to evaluate and discover new meanings as you revisit to dwell on the nuances.
Occasional printing errors and uneven page layout notwithstanding, Sanam’s power over words, whether whispered, lyrical or plainly expressed, leaves you wanting more. As his mind moves from stillness to action, as he soaks in the landscape or holds on to a memory or, when his fancy goes for a stroll, you happily hang out with him, curious yet unthreatened.