The spicing up of Penrith 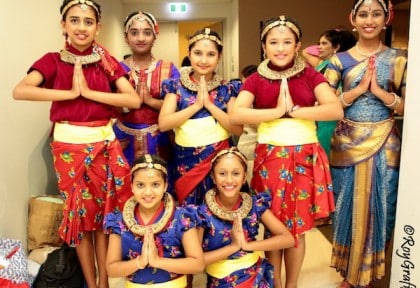 We all know the typical Indian style of dance, Bharatanatyam in the south and Bhangra in the north, but how well do we know Sri Lankan, Nepalese or Bhutanese dance? And how much do the local residents of Penrith know about subcontinental culture, food and fashion? The recent Spicy Penrith event answered these questions with creativity and flair.

Over 167 performers gathered to showcase dances from India, Sri Lanka, Nepal and Bhutan at the Joan Sutherland Performing Arts Centre. There were close to 30 performances on the night which gave everyone a chance to release their inner desi and have some toe-tapping fun.

The night began at 5:30pm, with stalls outside the theatre where guests could enjoy a Nepalese meal of momos or butter chicken and rice. There were girls getting fresh henna, stalls where people could purchase fair trade products and Indian artefacts, and onlookers enjoyed the traditional drum performance.
There were also women clad in pink sarees, representing the Pink Sari movement which aims to improve breast cancer screening rates in the subcontinental community. It was an amazing sight to see so many people involved in traditional Indian customs.

Once we were seated in the hall, we were introduced to the guest of honour, the Mayor of Penrith John Thain. He explained that in recent years, the demographics of Penrith have changed and there are now more South Asian members in the community than ever before.
The Spicy Penrith event is therefore very significant because it is an opportunity to celebrate the local community and gives a chance for dancers and performers to express their culture and values, he said. Most importantly, it introduces the culture and food to those who don’t know much about it.

This year was the fourth ‘Spicy’ event. From a small hall in St Mary’s, it has moved to a professional stage hall in Penrith and the audience has grown from 300 to 700! The audience was a mix of Indian and Australian families and everyone agreed the show was amazing because it was different.
Members of the audience were impressed by the effort and costuming. One older Australian woman said, “If my legs weren’t so wobbly, I would get up on stage and dance too!”

Spicy was a unique event because it brought together four communities, which have their own style and form, but at the end of the day, worked together seamlessly.
The event was organised by the Penrith City Council in conjunction with the Sinhalese Cultural Forum, the Association of Bhutanese in Australia (ABA) and the Nepalese Community of Western Sydney (nCOWS).
The main aim of these groups is to educate youths on the significance of maintaining their culture in a new environment and being responsible citizens who contribute to the community. Many of the dancers on the night were young people who took the initiative to be involved in a voluntary program.

Spicy Penrith was intended to raise awareness of the changing demographics in the area. Penrith city is a community where 26 per cent of citizens were born overseas. According to data from the Australian Bureau of Statistics, as of 30 June 2016, Indians make up the fourth most populous group in Australia.
In recent years, people from India have also become the fourth most populous group in the local Penrith area. Celebrating diversity and harmony through this event was not only enjoyable, but also significant in building stronger bonds among the local communities.

Photos by Roy Gunaratne of RoyGrafix